Canadian drilling will increase modestly next year, with the 2018 well count set to increase to 7,900 from 7,550, the annual forecast by the Petroleum Services Association of Canada (PSAC) is predicting. 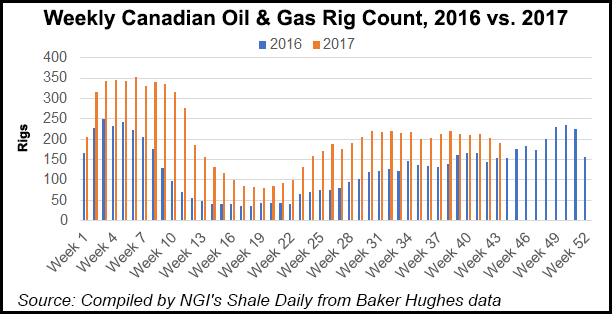 Next year’s expected field activity, while brisker than the Canadian industry’s severe 2015-2016 slump, would remain only two-thirds of the drilling pace before oil and gas prices fell in mid-2014.

PSAC is forecasting 2018 annual prices averaging US$53/bbl for oil and C$2.50 ($2.00/Mcf) for natural gas traded near Alberta and British Columbia wellheads. Along with firming prices, cost cutting by exploration and production companies would support gradual field activity acceleration while limiting contractor profits, according to the forecast

“Due to pressure to stay low, costs for services continue to be suppressed affording better margins for producers,” said PSAC President Mark Salkeld.

“For 2018, confidence that oil will stay in the low-to-mid US$50 range as markets tighten and inventories reduce, along with growing interest in Canada’s vast liquids-rich natural gas, should support a 4-5% increase in activity levels.”