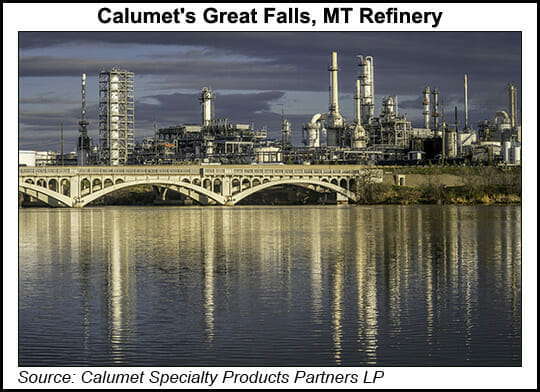 “Once complete, the renewable hydrogen plant will allow increased production of renewable diesel and further reduce the carbon intensity of products from MRL,” management said.

Acquired in 2012, the Great Falls refinery can process up to 30,000 b/d of crude oil into liquefied petroleum gas (LPG), naphtha, jet fuel, kerosene, ultra low sulfur diesel, and asphalt, according to Calumet.

The MRL project entails reconfiguring the Great Falls facility to process soybean oil, and potentially other renewable feedstocks from area farmers and ranchers, into renewable diesel. MRL is targeting demand on the U.S. West Coast and in Canada. Calumet has reported the stainless steel metallurgy of the refinery’s existing hydrocracker lends itself well – with slight modification – to processing renewable feedstocks.

“These Great Falls assets are well positioned for growth and this transaction establishes Calumet as an innovative player in the important shift toward sustainable energy,” said Oaktree Capital Management LP’s Jared Parker, managing director. Oaktree is partnering with Calumet in MRL.

In November, MRL was unveiled as a pure-play renewable diesel firm with a $145 million equity investment from Calumet and a $300 million secured loan from Oaktree. At the time, Calumet said its Montana presence would comprise “two fully independent business lines” going forward: the new MRL renewables unit and its existing “conventional Canadian crude refining” operations at Great Falls.

McMurray also noted that the Great Falls facility’s output could be expanded in the future because the hydrocracker that MRL is converting to renewable diesel service boasts a 25,000-b/d nameplate capacity.

The legacy refinery’s processing capacity is to be about 12,000 b/d.

McMurray said the company has not disclosed how much the project may cost. However, he added that the firm anticipates a total project construction cost below $20,000/bbl of capacity.

“This includes both the hydrogen plant and pre-treater, in addition to all of the piping and tankage retrofitting/construction costs for the reconfiguration,” he said.