After major swings the last couple of weeks from the double whammy of an ongoing oil price war and the coronavirus pandemic, natural gas forward prices steadied during the March 19-25 period, according to NGI’s Forward Look. 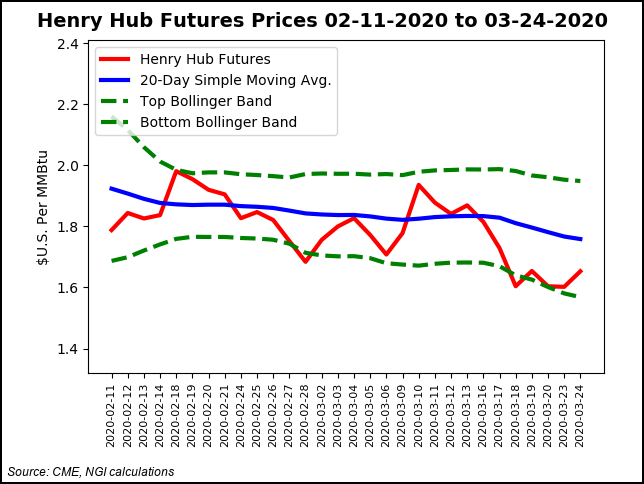 The entire forward curve posted average moves of less than a nickel, with near-term losses resulting from significant demand declines amid “stay-at-home” efforts across the country to stop the spread of Covid-19. Further out the curve, a projected slowing of gas production from a dramatic pullback in development announced by exploration and production (E&P) companies lifted prices for next winter and beyond, Forward Look showed.

“Consensus sentiment regarding natural gas pricing over the past several months has been that upside will be fleeting and that we are in a perpetually oversupplied paradigm,” said Mobius Risk Group’s analysts. “From our perspective, this sentiment is an accurate representation of what was rather than what is. While the second quarter of 2020 will be a battleground requiring supply and demand to collaboratively begin working off an 800 Bcf year/year storage surplus, curve shape suggests that by 2021, tightening market conditions will become a more impactful force.”

With the Henry Hub Nymex calendar year 2021 strip climbing more than a nickel over the week, the reorientation of hedge books may have contributed to the “relative” strength in longer-dated tenors, according to Mobius. “The need for near-term cash flow and the willingness to be less protected in longer-dated tenors could be pressing producers who have hedged up to or through proved developed producing volumes for multiple years to consider moving mark-to-market value to a part of the curve where cash flow considerations are paramount, and where volume flexibility may not be as meaningful.”

Meanwhile, with E&Ps continuing to announce hefty spending and activity cuts, analysts are finding it difficult to project exactly how production could be impacted. Genscape Inc. senior natural gas analyst Rick Margolin said the challenge of forecasting is complicated by the fact that “there are no true precedents or analogs for what is happening now and for how long.” Thus, the firm expects forecast changes to be frequent and potentially stark over the weeks and months ahead.

Since Genscape’s last main production forecast update six weeks ago, its outlook has decreased by about 1.1 Bcf/d, although 2020 still is expected to post year/year growth. On the demand side, about 0.4 Bcf/d so far has been trimmed from the firm’s summer forecast.

“Our overall reductions to gas demand this summer would be higher except that expectations for power burn were actually revised up by 0.1 Bcf/d, with lower prices generating enough price-sensitive switching to outweigh expectations for lower electricity loads,” Margolin said.

Demand impacts are being felt across the globe as well, and in a new era of U.S. liquefied natural gas (LNG) exports, those implications create even more uncertainty for the Lower 48.

Recent long-range weather outlooks by AccuWeather offer a glimmer of hope for continued U.S. LNG exports to Europe, however. The firm expects notably warmer-than-normal conditions to blanket the northern tier of the continent from the Atlantic to the western Baltic shores.

“This could be modestly supportive of power burns, which have already been migrating from coal to gas,” said Genscape’s LNG team. “Of course, the overall demand-destructive impacts to the European energy space from Covid-19 are believed to be substantial and likely a more powerful headwind than these conditions are stimulative.”

Areas in Portugal and Spain are expected to feel more like summer at times during May, according to AccuWeather. Interior locations may see several days with temperatures near 90 degrees F, while the hottest locations in Spain could see temperatures reach 100 in late May or early June. In London, highs are likely to reach 80 before the end of May, the forecaster said.

Also helping to support gas demand is that European consumption of coal for power generation has been in a steep retreat from mild weather, low gas prices driving coal-to-gas switching and the recent Covid-19 impacts, according to Genscape.

The Energy Information Administration (EIA) on Thursday reported a larger-than-expected withdrawal from storage inventories for the week ending March 20, but it failed to stop earlier bleeding in Nymex futures.

The EIA said that inventories fell by 29 Bcf, which compares with last year’s 39 Bcf withdrawal and the five-year average draw of 40 Bcf.

Ahead of the EIA report, a Bloomberg survey Wednesday showed a median projection of a 30 Bcf withdrawal, while a Wall Street Journal poll showed an average estimate of minus 27 Bcf. A Reuters survey landed on a 25 Bcf withdrawal, matching the 25 Bcf pull predicted by NGI’s model. Estimates ranged from minus 14 Bcf to minus 36 Bcf.

While the EIA’s actual figure was slightly larger than consensus, inventories remain robust after an unusually mild winter. Total working gas in storage as of March 20 stood at 2,005 Bcf, 888 Bcf higher than last year at this time and 292 Bcf above the five-year average of 1,713 Bcf, according to EIA.

Broken down by region, the Midwest pulled 20 Bcf out of storage during the reporting period, while the East withdrew 14 Bcf, EIA said. Small pulls were seen in the Mountain and Pacific regions, while the South Central posted a 15 Bcf injection into storage that included 11 Bcf into salt facilities and 3 Bcf into nonsalts.

Bespoke Weather Services, which had estimated a 23 Bcf draw, said the figure was looser in terms of supply/demand balances, “which is to be expected as we move forward in the slowdown of the economy. Numbers the next few weeks will be quite useful in determining how much demand loss is actually taking place, and, as a result, should carry more weight in terms of market impact, although duration is critical as well, which is a tougher assessment.”

After two straight weeks of upside despite an otherwise dismal backdrop in the natural gas market, Permian Basin prices finally succumbed to the pressure of projected lower demand.

Waha April prices plunged 24 cents from March 19-25 but remained in positive territory at an average 36.4 cents, Forward Look showed. May dropped 17 cents to 60.9 cents, while the summer strip (April-October) fell 13 cents to 90 cents. Winter 2020-2021 fared much better as outlooks point to more meaningful stepbacks in production later in the year, gaining 5 cents to hit $1.73.

However, while the lower liquids-directed drilling activity expected in the Permian should result in less associated gas, other factors complicate that expectation. Genscape said that the collapse of energy prices indicate ethane rejection is likely to spike, which could inflate gas production.

Genscape’s natural gas liquids (NGL) team recently noted that the forward ethane fractionation (frac) spreads “remain firmly in negative territory throughout the first half of 2020, with summer 2020 frac spreads at minus 67 cents/MMBtu.”

This means that it costs that much more to extract and process ethane from a raw gas stream than one can sell the processed ethane for, according to the NGL team. “In negative frac spread environments, producers opt to reject the ethane by leaving it in the raw gas stream. This inflates raw gas production numbers and increases the heat content of those streams.”

For now, Genscape’s NGL team estimates nearly 1.43 Bcf/d of Lower 48 raw gas production is composed of rejected ethane. Given existing forward curves for ethane, natural gas and oil, it is forecasting ethane rejection could further increase to about 1.6 Bcf/d equivalent by September.

On the East Coast, Texas Eastern Transmission (Tetco) has announced pressure restrictions on the PennJersey Line in M3 following stress corrosion cracking (SCC) investigations on Line 12 between the Armagh and Perulack compressor stations in Pennsylvania, which were also involved in last year’s outage from Delmont to Perulack. The first two tool runs on the segment were scheduled for Thursday, with an additional tool run tentatively scheduled for April 9. Report dates for the tool runs are not scheduled until August, indicating that restrictions would be in place until at least then, according to Genscape.

Although as much as 184 MMcf/d of capacity has been cut from the additional restrictions, flows are not expected to be impacted, Genscape analyst Josh Garcia said. Tetco also announced additional SCC-related capacity constraints between Longview, TX and Lebanon, OH, but these constraints were equally unimpactful in less crucial markets.

Indeed, the only response to the restrictions was seen at the front of the Texas Eastern M-3 forward curve. April prices dropped 6 cents from March 19-25 to reach $1.320, but the summer strip was down only a penny to $1.51, according to Forward Look. Winter prices rose 6 cents to $3.55, while next summer picked up 5 cents to $1.98.

Farther north, Algonquin Gas Transmission’s maintenance calendar shows that mainline capacity would not be lowered for summer seasonal capacity, which is to be the first summer since 2013 where summer mainline capacity would not be reduced from winter levels. The bulk of the scheduled mainline outages are to take place between mid-April and the end of May, with several significant outages in between. Unlike last spring and summer, there are no prolonged outages, but there are some individual days with high impact.

“For example, capacity through Stony Point will be cut by 528 MMcf/d on April 17, 773 MMcf/d on May 19 and 926 MMcf/d on May 27,” Garcia said. “This period presents notable upside risk for Algonquin Citygate prices if weather and demand materialize strongly. After that period, the next truly significant outage does not occur until July 28.”

In Western Canada, Westcoast Transmission also released a prospective calendar showing available flow capacity through the end of November, including summer 2020 flows up around 165 MMcf/d year/year, but down around 100 MMcf/d compared to normal summer flows before the pipeline’s October 2018 explosion and force majeure.

The calendar showed April-October capacities ranging between about 1,100 MMcf/d and 1,570 MMcf/d, averaging at around 1,315 MMcf/d. “For comparison, the average flow in the four previous summers, excluding the aftereffects of the explosion and severely reduced flow in October 2018, was 1,420 MMcf/d,” Garcia said.

“This calendar is consistent with our expectations that enhanced inspections could lead to capacity restrictions this year in the wake of the October 2018 force majeure and Canadian Transportation Safety Board report issued earlier this month,” the analyst said.

Nova/AECO C forward prices posted a modest gain at the front of the forward curve, but small losses were seen throughout the remainder of the strip. April rose a penny between March 19-25 to reach $1.235, while summer prices fell 4 cents to $1.22, Forward Look data show. Prices for next winter slipped 1.0 cent to $1.63, while summer 2021 held steady at $1.43.