Releasing numbers that most likely belie the impending drilling reductions in response to the recent collapse in crude prices, Baker Hughes Co. (BKR) reported a one-rig increase in oil-directed drilling during the week ended Friday (March 13). 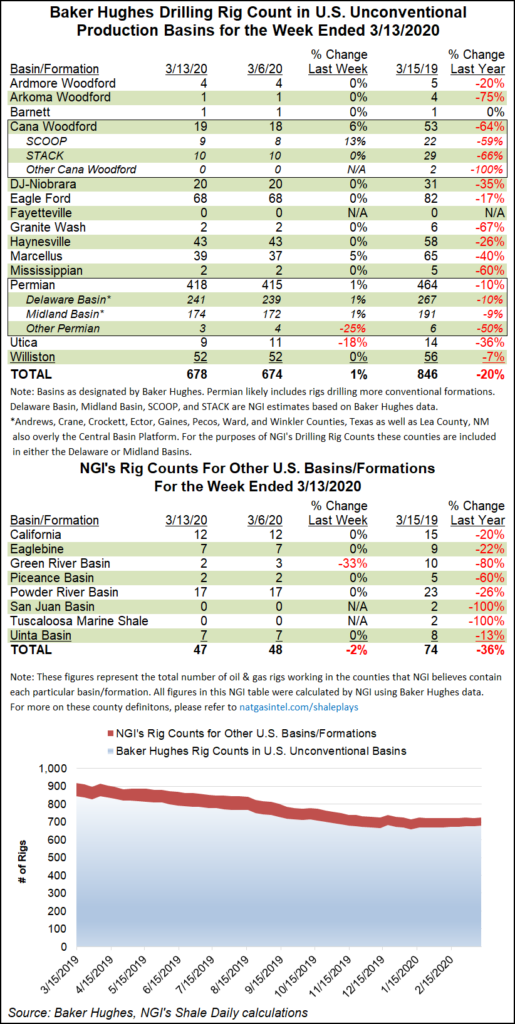 After factoring in the loss of two natural gas-directed rigs during the week, the combined U.S. count eased one unit lower to 792, down from 1,026 rigs active in the year-ago period.

Three rigs returned to action on land, partially offsetting a four-rig drop in the Gulf of Mexico. Total horizontal units increased by three, while three directional units and three vertical units exited during the period.

The Canadian rig count dropped 28 units week/week, falling to 175, including the loss of 19 oil rigs and nine gas rigs. The combined Canadian count finished the week 14 rigs above its year-ago total of 161.

The overall North American rig count finished the week at 967, down from 1,187 a year ago.

Among major plays, the Permian Basin saw the largest increase for the week, adding three units to increase its total to 418, down from 464 a year ago. The Marcellus Shale added two rigs week/week, while the Utica Shale dropped two. One rig returned to action in the Cana Woodford, according to BKR.

Among states, the Texas rig count climbed four units on the week, while five rigs exited in Louisiana. West Virginia added two rigs, while Ohio lost two. One rig was added in New Mexico, while one rig exited in Wyoming.

Activity increased in the oil patch during the week, but producers have telegraphed a slowdown to come after recent actions by the Organization of the Petroleum Exporting Countries and its allies fundamentally altered the outlook for crude. A $30/bbl West Texas Intermediate price has forced an immediate response from players in the U.S. onshore.

Apache Corp. revealed that it is dropping all of its Permian Basin rigs and slicing its dividend by 90%, joining a growing list of oil and natural gas operators responding to the collapse in oil prices and the devastating coronavirus that is gripping the country.

Along with Apache announcing sharp cutbacks Thursday, U.S. exploration and production (E&P) operators including Contango Oil & Gas Co., Devon Energy Corp., Murphy Oil Corp., Ovintiv Inc. and PDC Energy Inc. have tossed their original 2020 capital programs. The parade of pullbacks began this past Monday, with a number of E&Ps since announcing they have retrenched.