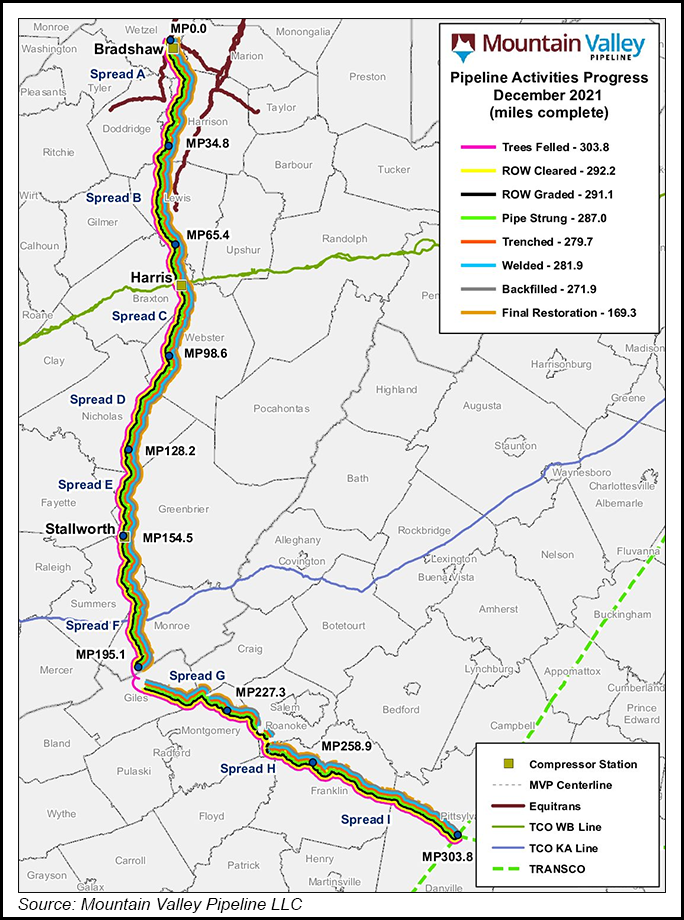 The Republican Senator representing Pennsylvania’s 15th District introduced the bill to limit regulatory and litigation delays as a result of “outdated laws,” the Senator said. Such laws would include the Federal Water Pollution Control Act, the National Environmental Policy Act of 1969 and the Endangered Species Act of 1973.

“The obstruction of common-sense, essential energy infrastructure projects has resulted in higher energy costs, increased global reliance on energy produced by tyrants like Vladimir Putin, and ironically prevented increased distribution of the energy source most responsible for the declines in U.S. greenhouse gas emissions,” Toomey said.

CEO for EQM Midstream’s parent company, Equitrans Midstream Corp., Thomas Karam said, “As a matter of energy security, permitting reform legislation would address and ensure our nation’s ability to produce and deliver our vast domestic energy resources, including renewables, and enhance our ability to effectively transition to a lower-carbon future.”

The bill, which does not yet have any text associated with it, has now headed to the Committee on Environment and Public Works.

“Pennsylvania has world class natural gas assets, but pipeline constraints prevent us from fully unleashing the value of these resources for consumers locally and allies abroad,” said Marcellus Shale Coalition President David Callahan. “Natural gas demand is strong – and we’re seeing producers across the state respond with new well activity, but we need to be able to get the product to consumers, domestically and abroad. America needs action on policies that will reduce chronic permitting delays, encourage more local manufacturing uses and build more energy infrastructure.”

Meanwhile, a last-ditch effort similar to Toomey’s permitting reform bill by Sen. Joe Manchin (D-WV), who chairs the Senate Energy and Natural Resources Committee, once again failed to make it into broader legislation.

The 2023 National Defense Authorization Act, the final text of which was unveiled Tuesday, did not include Manchin’s proposed reform to shorten the timeline of the National Environmental Policy Act reviews and minimize judicial challenges to proposed energy projects.

“Our energy infrastructure is under attack and America’s energy security has never been more threatened,” Manchin said of the bill’s exclusion.

“Failing to pass bipartisan energy permitting reform that both Republicans and Democrats have called for will have long-term consequences for our energy independence. The American people will pay the steepest price for Washington once again failing to put common-sense policy ahead of toxic tribal politics. This is why the American people hate politics in Washington.”

In similar news, prior to Toomey’s bill introduction, the Industrial Energy Consumers of America (IECA) submitted comments to the U.S. Department of Energy (DOE) on its request for information for best uses of the Defense Production Act (DPA). The IECA is a nonpartisan association of manufacturing companies representing 12,000 facilities nationwide.

Cicio noted that “there is either none or very limited firm pipeline capacity available, and the firm capacity that is available is being taken by entities that can pass those scarcity prices to consumers.”

With the Transcontinental Gas Pipe Line (Transco) being the only major pipeline supplying the entire Eastern Seaboard, and no new pipeline capacity coming online in the near term, “…the only solution is to use the DPA to intervene at the state level to require electric utilities to temporarily delay the shutdown of coal-fired generation,” Cicio said.

According to the executive, 59 coal-fired units along Transco are scheduled to retire and be replaced with natural gas generation, which could “significantly increase demand by 10 Bcf/d and directly impact manufacturing facilities.”

Cicio also pointed to a March report from the U.S. Energy Information Administration that found that without interstate natural gas pipeline build-outs, the East North Central, Middle Atlantic and South Atlantic regions are among the most sensitive to changes in pipeline capacity because of limited growth in Appalachian Basin production.

“Last winter, for areas like Transco Zone 5, manufacturers paid over $20/MMBtu for their natural gas,” Cicio said. “Until additional pipeline capacity or compression is added, our only hope to avoid more serious shortfalls of supply is to encourage state public service commissions to temporarily delay the shutdown of coal-fired generation.

“There is no good alternative fuel to replace natural gas in manufacturing processes.”