Permian Basin pure-play Callon Petroleum Co. continued its transition to larger pads and brought its largest project to date online during the first quarter, while also delineating its acreage and reducing drilling and completion (D&C) costs. 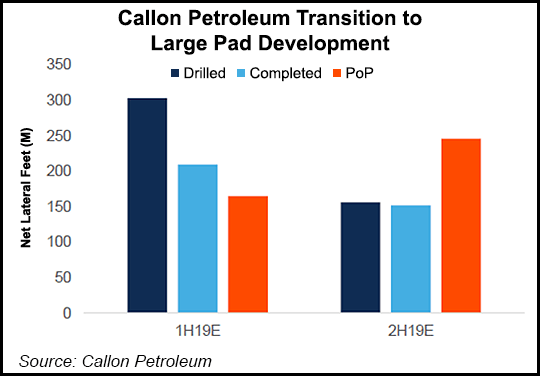 The Houston-based independent said it has an inventory of 16 net drilled but uncompleted wells and was moving toward developing mega-pads in the Delaware sub-basin in 3Q2019. Callon said it spent $185.7 million on capital expenditures (capex) in 1Q2019 and expects to spend 60% of the capex budget, $600-630 million, during the first half of the year.

Callon plans to follow up its success with mega-pads in the Midland sub-basin on legacy acreage and property acquired last year from Cimarex Energy Co. The company is currently running six rigs.

“Our drilling plan is quickly progressing to the point where we will decrease to four drilling rigs and start larger Delaware Basin pad completions toward the end of the second quarter,” CEO Joe Gatto said.

During a conference call to discuss earnings Tuesday, Gatto conceded that the decision last month to sell the Ranger operating area would impact plans to be cash flow neutral in 2020 at an oil price of $52.50/bbl.

“If you do the simple math and take those cash flows out there, that is offset by paying down debt and potentially a preferred issuance that makes back some of it, but we still have a little bit of work to do to get back to that $52.50, and we have a couple good ways to do that,” he said.

“In removing Ranger, we have moved some drilling obligations that we have down there in 2020, which gives us a little more operational flexibility to move to more capital efficient areas on our asset base. We’ve talked about some of the pricing uplifts that we expect to get from our marketing arrangements as we move to our pricing points away from Midland. We’re looking at some of those and those should continue to help our price realizations in 2020.”

During the quarter, Callon also completed a five-well pad in the southern part of its WildHorse operating area in the Midland sub-basin of West Texas. The wells in Howard County targeted the Wolfcamp A formation. The combined five-well average for accumulated production was more than 1,500 boe/d (92% oil).

The company also reported D&C costs averaged less than $1,000/lateral foot in 1Q2019, a 15% sequential reduction and about 20% lower than the 2018 average. Delineation projects in the first quarter focused on the Middle Spraberry formation in the Midland and the Second Bone Spring formation in the Delaware.

“It’s pretty early right now,” COO Jeff Balmer said of the Middle Spraberry and Second Bone Spring. “I doubt that we’ve drilled our best well out there. We’ll look at what we’ve done, how we completed it, where we targeted it, how the well declines over time, what types of lifting mechanisms look the best and then give an assessment of the viability of that…

“There are some cost savings associated with that,” on the drilling and completions side. “That makes the targets even more attractive, but it’s probably too preliminary to go down the inventory road right now with either of those two zones.”

The company also agreed last month to a strategic trade to expand its contiguous position in Howard County. Gatto said the Ranger divestiture would not impact the base activity levels this year as no activity was planned.

Callon drilled about 16 net horizontal wells and placed 11 on production during 1Q2019.