Callon Petroleum Co. late Tuesday struck a $327 million deal to acquire more land in the red-hot Permian Basin, which has overtaken every onshore area for merger activity to date. 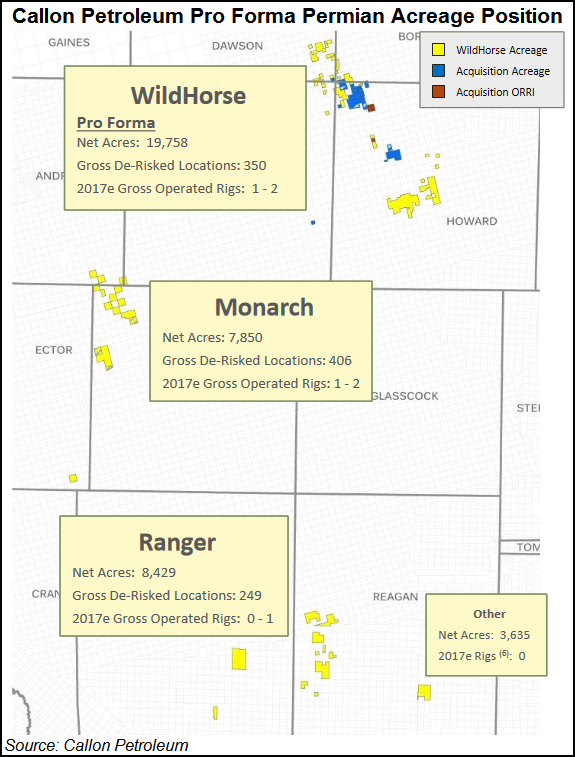 The Natchez, MS-based independent said the transaction would add about 5,667 net surface acres, primarily in Howard County in the Midland sub-basin. The seller, Plymouth Petroleum, is operated by affiliates of Midland, TX-based Element Petroleum and is indirectly owned by ArcLight Capital Partners LLC and management.

The Permian pure-play’s Midland position would expand to an estimated 40,000 net surface acres, half in northwest and central Howard County and adjacent to its prized WildHorse operating region (see Shale Daily, Aug. 12).

“We are driven to identify opportunities that are underpinned by solid geology and proven well results, and also offer meaningful upside potential through application of new generation completion designs, increased well density and incremental prospective zones,” CEO Fred Callon said. “We believe this acquisition has all of these attributes and its value proposition is further enhanced due to its immediately offsetting footprint within our WildHorse area, which will allow us to extend laterals within the combined well inventory and leverage infrastructure investments for future program development.”

Putting the spotlight on North America’s hottest play, NGI’s newly released special report Permian: ”The Mother Lode’ — Texas Play Heats Up as Industry Looks to Get Back to Work takes a closer look at who’s doing what, where, and for how much in the play. How hot is it? On Tuesday, EOG Resources Inc. joined a cavalcade of buyers over the past two months in agreeing to pay an estimated $2.5 billion for Yates Petroleum Corp, which among other things would double the Houston operator’s position in the Permian’s Delaware sub-basin (see Shale Daily, Sept. 6).

About three-quarters of Callon’s to-be-acquired acreage offsets Callon’s position in northwestern Howard County, allowing it to share infrastructure and use extended laterals across its footprint. Callon has identified 112 net horizontal drilling locations targeting the Wolfcamp A and B zones, along with the Lower Spraberry.

The existing drilling inventory within the WildHorse operating region would jump to an estimated 90%-plus, based on spacing six-to-eight wells per section.

Net production from the properties is estimated at 2,300 boe/d, 86% oil-weighted, from nine horizontals and 16 verticals. Proved net reserves are estimated at 12.2 million boe.

Callon holds overriding royalty interests in three 480-acre units offsetting the acreage, one of which it operates. Once the transaction is completed, now set by Oct. 20, Callon would assume operatorship of 90% of the acquired acreage and own an estimated 62% average net working stake.

Callon’s first operated horizontal well in WildHorse ramped up in early July. The Silver City A No. 1H, completed in the Wolfcamp A interval, had a lateral length of 7,363 feet and is “within five miles of over 75% of the pending acquisition acreage.”

The Silver City well recently achieved a 30-day average peak production rate of 2,123 boe/d (90% oil), or 288 boe/d per completed lateral foot. The well cumulatively has produced more than 110,000 boe (90% oil) over the initial 60 days since the date of first production, Callon said.

ArcLight partnered with the Element Petroleum management team to form Element II in 2011, led by CEO Todd Gibson. The private equity fund recently made its third investment with Element, committing $186 million to Element Petroleum III in September 2015 to acquire and develop additional properties in the Permian.

Over the past five years, Element II drilled 76 wells across a land position of 21,500 net acres in the Permian, including a horizontal Wolfcamp well in May 2013 in Howard County.

“We continue to see many opportunities in the Permian Basin and are excited to continue to have ArcLight’s partnership and support in Element III,” said Gibson.