The Department of Energy (DOE) has approved a request by California’s electric grid operator to dispatch more than 200 MW of natural gas-fired generation capacity beyond currently permitted levels to compensate for projected shortfalls in power supply. 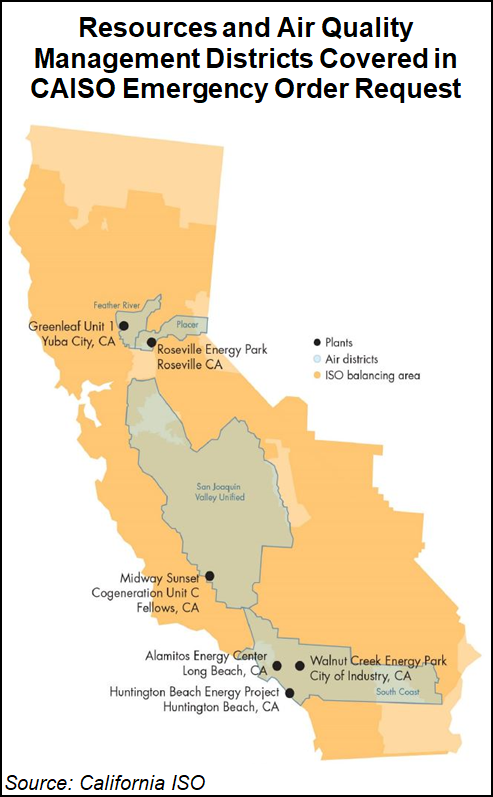 The plea comes amid surging natural gas prices in the United States and abroad, with double-digit Henry Hub prices seen as possible this winter.

The emergency order approved by DOE will remain in effect until Nov. 9.

“California and other parts of the Western United States are experiencing extreme heat this summer,” Rothleder said. “The threat of wildfire to the reliable operation of the bulk power system remains significant.”

He added, “Drought conditions are greatly affecting the availability of hydroelectric power.”

Due to the drought and abnormally high temperatures, CAISO “expects the wildfire season, which began early this year, to continue into November.”

Wildfire threats “can cause sudden de-rates of transmission capability” and of generating facilities on the CAISO system, Rothleder said.

For September, CAISO is forecasting “a significant supply deficiency to meet planning reserve requirements during evening hours,” officials said, adding that the additional gas-fired capacity “is critical” to CAISO maintaining reliability and meeting its load obligations.

Since June, Gov. Gavin Newsom has issued three proclamations of a state of emergency regarding electricity.

The proclamations waived certain permitting requirements to allow the use of backup power generation and freed up additional capacity to alleviate electric demand on the grid. Newsom also authorized the California Energy Commission (CEC) to expedite amendments to existing power plant licenses and issue new licenses to emergency and temporary generators.

CAISO, for its part, has denied the requests of five existing generating facilities to mothball or retire over the last 18 months, preserving more than 400 MW of existing generation supply.

He added, “Despite these efforts, the CAISO still forecasts a significant shortfall during some operating hours on days with high temperatures and increased electricity demand.”

Adding to the headaches, Pacific Gas and Electric Co. is slated to decommission the Diablo Canyon Unit 1 and 2 nuclear facilities in 2024 and 2025, respectively. The shuttering of Diablo Canyon will bring 2.2 GW of carbon-free, firm capacity offline, highlighted the authors of a recent study commissioned by the Environmental Defense Fund and Clean Air Task Force.

To ensure grid reliability and meet the state’s goal of a carbon-neutral economy by 2045, “California needs to replace today’s carbon-emitting gas-fired power plants, which supply over 40% of the state’s electricity, with some alternative source of clean electricity that is available on demand, for as long as it is needed, whenever it is needed,” researchers said.

Their modeling showed that geothermal and nuclear facilities, as well as gas-fired plants with carbon capture and gas-fired plants converted to run on low-carbon green or blue hydrogen, all could “provide critical reliability that could prevent a Texas-sized tragedy,” the authors said, referencing Winter Storm Uri in February.

The resources approved by DOE for dispatch in the emergency order include a cogeneration facility, two combined cycle plants, a simple cycle plant, and two new aero-derivative turbine facilities.

The cogeneration, combined cycle and simple cycle capacity sought is not currently permitted because it would exceed the allowed limit on nitrogen oxide emissions. The aero-derivative turbine units, meanwhile, are still awaiting an operating permit under Title V of [the] Federal Clean Air Act.

SoCalGas has warned that the facility is crucial to balancing the energy system during peaks and valleys of variable wind and solar generation.