As California’s new state rules (SB 4) for hydraulic fracturing (fracking) continue to unwind (see Shale Daily, June 18), the state’s richest oil-producing area, Kern County, at the southern end of the San Joaquin Valley, is in the process of launching its own detailed review of fracking, mirroring an already challenging effort at the statewide level. 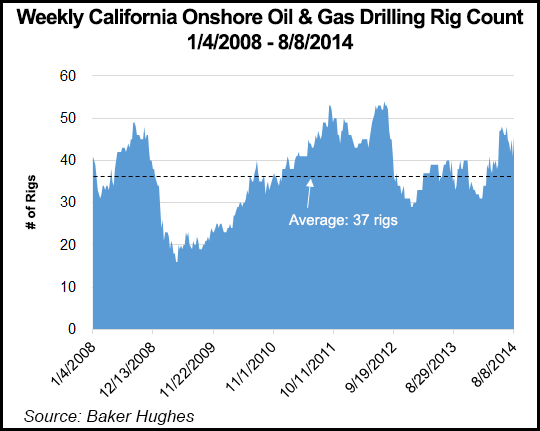 The catch in Kern County is that the effort is being led by the oil and gas industry and they are making no direct reference to an “environmental review.” They are embarking on an effort to have the county amend its zoning policy by creating an “oil/gas conformity review,” said Michael Balster, an energy attorney with Paul Hastings LLP in San Francisco who is working on the effort.

Balster said the local level work may result in the first California Environmental Quality Act (CEQA) application specifically for fracking, even ahead of the statewide work tied to the implementation of SB 4.

Behind the latest county level effort — paralleling the state’s elaborate environmental impact review (EIR) now ongoing as part of SB 4 implementation (see Shale Daily, Dec. 12, 2013) — are the Western States Petroleum Association, the California Independent Petroleum Association, and the Independent Oil Producers Agency. They collectively called for amending the county zoning ordinance, which makes no direct reference to oil and gas, to provide more certainty for drilling activity in the county, which accounts for 80% of the state’s oil production.

The industry and the county’s thinking has been that the county-level work will help the state Division of Oil, Gas and Geothermal Resources prepare the statewide EIR on fracking. The county ordinance makes no direct reference to environmental protection, and it simply states it is to “promote the economic production of oil and gas” in the county, Balster said.

Kern County’s new zoning ordinance was prepared a year ago, but it is still in draft form, according to Balster, who said there are two operable provisions for oil and gas in the proposed code. There are “zoning districts,” some in which no local permitting is required for oil/gas drilling.

There is an exclusive “agriculture-limited, agriculture-industrial and natural resources” district where no local permit or review by the county is needed, Balster said. But if the district is zoned “recreational/forestry” or “light industrial,” a county permit is required.

Ultimately, Kern County is seeking to update its standards and conditions for addressing environmental impact from pre-drilling exploration, well drilling and well operations, along with its new oil/gas conformity review for permitting of future drilling and operations. Operators will be required to submit drilling plans to the county, and they are supposed to get a decision in 10 working days, said Balster. The requirement applies to new or reworked wells.

“This could end up being the first CEQA EIR activities on fracking in the state,” Balster said. “Everyone is waiting to see if at the end of this process there are going to be new requirements for mitigation. The million-dollar question everyone wants to know the answer to is where these proposed new projects are going to be located, but unfortunately we won’t know that until the county’s draft EIR comes out probably sometime this fall.”

What is known about the draft is that it will address some of the varying conditions for drilling in different parts of Kern County, Balster said. “It doesn’t appear that it will be a ‘one-size-fits-all’ EIR for the county.”

California, which has averaged 37 onshore oil and natural gas drilling rigs since 2008, had 46 rigs on Aug. 1, according to Baker Hughes data.