California’s oil and natural gas hotspot Kern County is set to resume issuing permits to drill in  April after adopting enhanced rules that could allow more wells to be permitted every year. 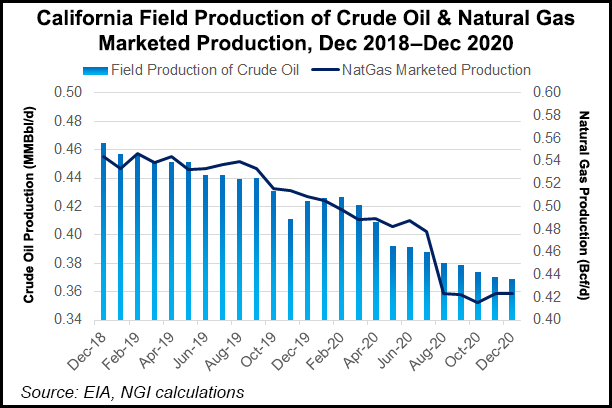 The five-member Board of Supervisors on Monday unanimously adopted the ordinance, which includes restrictions that could increase the costs for oil and natural gas operators.

The rules, which would take effect around April 6, establish a generic environmental impact assessment and would require larger buffers between homes and wells along with muffled drilling noise.

Kern County, in the heart of California’s agriculture- and oil-rich San Joaquin Valley, has undergone a long process leading up to the ordinance. A draft environmental report prepared after the Fifth District Court of Appeals in Fresno last year set aside efforts to streamline the permitting process.

Prior to the court’s order, wells permitted averaged 1,900 a year with an annual cap of 3,647 new wells. Under the new ordinance, the cap is 2,697 new wells annually. “That is the upper limit, and I expect about 2,000 a year,” said Kern County’s Lorelei Oviatt, director of the Planning and Natural Resources Department.

Oviatt, who had recommended the ordinance be adopted, said Chevron Corp., Aera Energy LLC, California Resources Corp., and smaller local operators like Berry Petroleum Co. and Hathaway LLC, are among the biggest customers for permits.

“We will return to court some time in the future for the review of our compliance with the California Environmental Quality Act, but permitting is not affected by that time period,” she said.

Western States Petroleum Association President Catherine Reheis-Boyd said the new ordinance would require operators to pay more fees, but the funds would be reinvested in the surrounding communities.

“There is no more important issue than our energy future and balancing the concerns for our environment, equity and the economy,” she said. “Our future must be shaped by facts, not fears. And the fact is, there are tens of thousands of highly skilled, dedicated and conscientious scientists, engineers and passionate problem-solvers across the oil and gas industry in Kern County — each of them with families and children of their own who breathe the same air, drink the same water and share the same economic future.”

In 2019, Kern County was the seventh largest oil-producing county in the nation, with annual output of 119 million bbl/year, according to the Energy Information Administration. The output represented 71% of California’s oil production and 3% of total U.S. oil output. The county also produced 129 Bcf of natural gas in 2019, or 78% of California’s output.