Kern County, CA, has begun a process that could lead to resuming oil and gas well permitting in April if county supervisors approve a draft environmental report prepared after an appellate court last year set aside efforts to streamline the process. 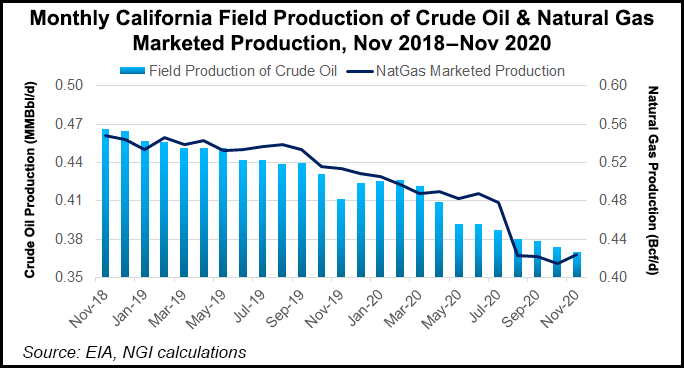 The Fifth District Court of Appeals based in Fresno, CA, halted the permitting system last March, and Kern County since has been drafting a Supplemental Recirculated Environmental Impact Report (SREIR). A final version was issued last Friday.

The court said the county had violated the California Environmental Quality Act. The draft impact report is scheduled to undergo a planning commission hearing on Feb. 11.

If the Kern County Board of Supervisors approves the draft on March 9, permitting could resume April 9, Kern County’s Lorelei Oviatt, director of Planning and Natural Resources, told NGI’s Shale Daily.

“We will return to the court for compliance and a decision” on the environmental impact report process, she said. If approved by county supervisors, “we don’t have to wait to start permitting again.”

In 2019 Kern County was ranked as the seventh largest oil-producing county in the nation, with annual output of 119 million bbl a year, according to the Energy Information Administration. The output represented 71% of California’s oil production and 3% of the total U.S. oil output. The county also produced 129 Bcf of natural gas in 2019, or 78% of California’s output.