If its Monterey Shale potential is fully realized, California could get back to its modern-day high levels of oil production at the 1 million b/d mark, but ongoing issues of water and energy sustainability may get in the way, the state’s oil/natural gas supervisor said during a panel discussion Thursday night at Loyola Marymount University (LMU) in Los Angeles. 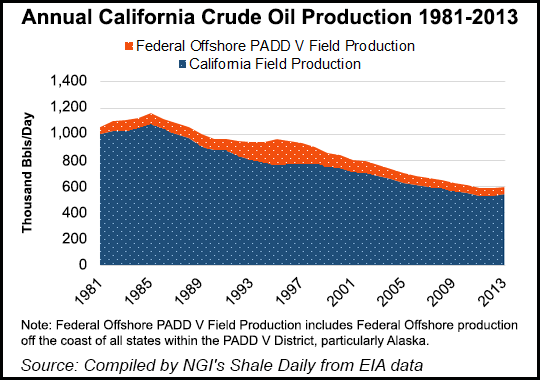 “Oil in California is produced from aquifers, and we actually produce way more oil than water,” said Steve Bohlen, head of the state Division of Oil, Gas and Geothermal Resources (DOGGR). He said the state’s oil production is 600,000 b/d. “Ultimately the question becomes whether that water [produced with oil] could be put to some beneficial use.”

Bohlen spoke on a panel discussion on “California’s Sustainable Future: Water and Energy Challenges,” hosted by a local chapter of the American Academy of Environmental Engineers and Scientists (AAEES). It included representatives from the California Water Resources Control Board and the State Lands Commission, along with the nonprofit Council for Watershed Health.

In the context of sustainability, Bohlen emphasized that California imports two-thirds of the oil products it consumes at its present production levels, and even if the Monterey Shale increases in-state production beyond 1 million b/d, still nearly half of the state’s requirements will have to be met by imports unless renewables can overcome some of their limitations.

“We presently import more than 1.2 million b/d,” he said. “The big reason we import so much oil is that Californians drive almost a billion miles a day. It is conceivable that with the development of unconventional resources from the Monterey Shale formation, we may be able to get our production up by several hundred thousands of barrels per day, maybe as much as a half-million b/d.

“But that is not going to happen soon, if it happens at all through a series of advanced technologies. Even then, we will still have to import roughly half of our oil.”

So the key to sustainability of energy in California is not so much water-related, but it is directly related to transportation, he said.

A hot topic “for some time to come” within the energy sector is fracking, said Bohlen, adding that Gov. Jerry Brown and DOGGR believe fracking can be done safely under the proposed rules (SB4) being implemented in the state (see Daily GPI, June 14). He encouraged his audience of mostly engineering and science students to “study the reality” if they want to engage in the fracking debate.

In response to a question, Bohlen said generally, hydraulic fracturing (fracking) consumes relatively little water, and that in California those amounts are even less. However, in the state’s current drought-plagued condition, even relatively small amounts of water for fracking are hotly debated.

Water is the other big challenge to energy sustainability, said Bohlen, adding that it takes water to both explore for and produce oil and natural gas. “It brings oil and gas into conflict with aquifers in the state and how they are used,” he said. “So there are an enormous number of challenges we are working out on the state level and with the U.S. EPA.”

Bohlen recognized that his state agency has to constantly wrestle with “an inherent conflict” in its mission of advancing oil/gas development while protecting the environment.