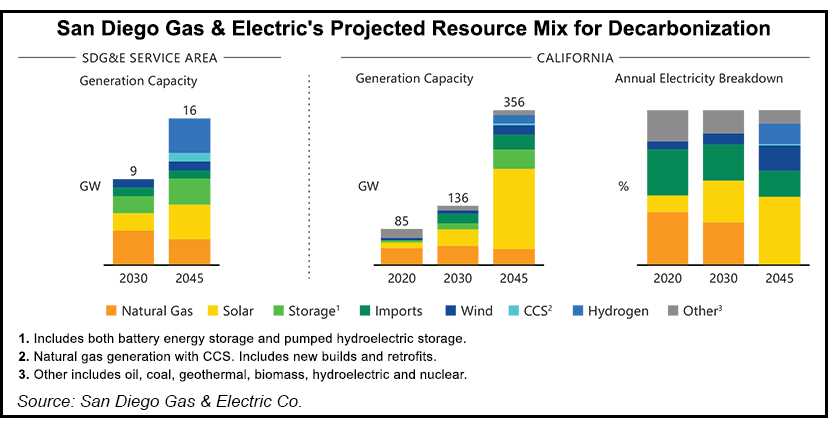 The current application follows the CPUC’s decision in July 2021 to dismiss a similar application from the three utilities and Pacific Gas & Electric Co., calling the application “premature and inefficient.” CPUC advised the utilities that a future application should provide “improved collaboration” with University of California (UC) Riverside, the California Energy Commission (CEC) and other stakeholders.

In July, CPUC commissioned UC Riverside and the Gas Technology Institute to study 5%, 10%, 20% and 50% hydrogen-methane blends in components of natural gas pipeline infrastructure. The Hydrogen Blending Impacts Study ultimately revealed that, while hydrogen injections may lead to a greater chance for leaks in pipeline infrastructure, more research from real world demonstrations would be needed before determining a systemwide injection standard.

As such, SDG&E, SoCalGas and Southwest Gas jointly filed to develop pilots that would “help inform establishing a future systemwide hydrogen injection standard that allows for significantly higher percentages.”

The utilities said in their proposal that projects would not only draw on recommendations from the UC Riverside study, but also use the UK’s HyDeploy initiative, which has so far demonstrated up to 20% hydrogen blends can be safely used in existing pipelines and end-user equipment without changes to infrastructure.

Sempra subsidiary SDG&E in late August entered into a nonbinding memorandum of understanding (MOU) with UC San Diego (UCSD) to collaborate on the proposed hydrogen blending project. UCSD, as with the other nine UC schools, in 2013 committed to achieving carbon neutrality from its buildings and fleets no later than 2025.

If the CPUC approves the joint application, SDG&E would begin constructing meters and PE pipes over an 18-month planning, design, construction and commissioning phase. The pipes would isolate four graduate housing buildings from the surrounding system. SDG&E would also install an electrolyzer to produce the green hydrogen, as well as a storage tank and hydrogen blender.

The investor-owned utility would collect baseline data with 100% natural gas, according to the application. Over a two-year testing period, SDG&E would begin blending hydrogen into the PE distribution system beginning at a 5% concentration, increasing up to a 20% blend. Following a five-month decommissioning and equipment removal phase, data from the pilot would be interpreted for about nine months, then released in a public report.

Pending CPUC approval, construction could begin in the second quarter of 2024, with blending occurring in late 2024 through early 2026, SDG&E said. The site would be fully restored to its original condition upon conclusion of the project.

SDG&E’s project could cost around $12.2 million, according to the proposal.

“If approved by the CPUC, the project cost would be paid by all SDG&E gas customers because the project is intended to benefit everyone by advancing knowledge and understanding of a potential decarbonization solution,” a spokesperson for SDG&E told NGI.

SoCalGas’ pilot, for which it entered into a nonbinding MOU with UC Irvine, is estimated to cost upwards of $12.8 million. The utility’s project is similar to SDG&E’s, but would test green hydrogen in an isolated section of the campus’ steel and plastic medium pressure natural gas distribution pipeline system.

Southwest Gas’ pilot, meanwhile, could cost more than $10.2 million, according to the joint application. According to supporting documents for the joint application, the town with which Southwest Gas would partner, Truckee, CA, is one of the coldest cities in the country, and a hydrogen blending project would therefore provide information on hydrogen’s performance in a high altitude, cold climate.

What’s more, Southwest Gas’ project also differs in the end-use equipment that would be involved, which would include a backup natural gas generator, range, gas lights, radiant heaters, furnaces, boilers and water heaters.

SDG&E noted that the Inflation Reduction Act, signed into law by President Biden in August, is expected to provide hydrogen production tax credits of up to $3 per kilogram. The utility, which provides energy services to 3.7 million people in San Diego and Orange counties, also highlighted California’s May announcement of its intention to seek federal funding to develop a regional hydrogen hub. While the current pilot project would not be eligible for funding from the U.S. Department of Energy, SDG&E told NGI its involvement in a California hydrogen hub is still to be determined.