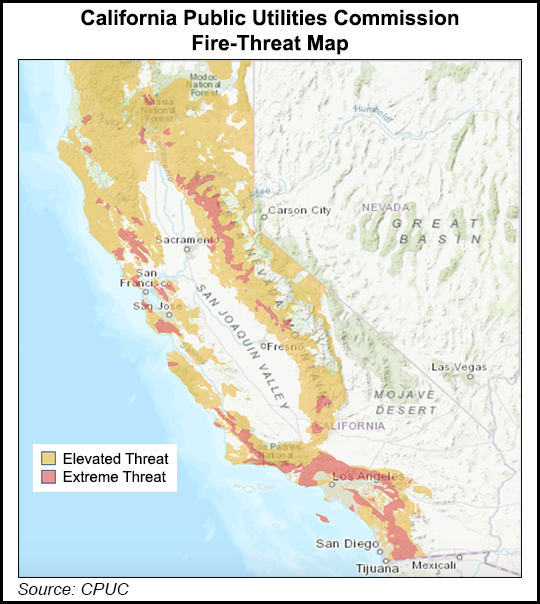 As two fires were raging in Southern California, utility executives in separate hearings over the past week said infrastructure had been hardened and planned outages refined to impact precise areas and fewer customers. Zones also have been established for backup power to essential service providers, with protections for Covid-19 related facilities.

During the virtual California Public Utilities Commission (CPUC) hearing, President Marybel Batjer noted that the public service power shutoffs (PSPS) should be “last resort” options, and when invoked be as small in scope and short in duration as possible.

Senior Vice President Phil Harrington of Southern California California Edison Co. (SCE), who oversees transmission/distribution, said the utility is expecting above-normal heat, winds and dry weather this fall. From July to October 2019 SCE called several PSPS events, but less than 2% of the five million customers were impacted, he said. Crews found nearly 50 instances in which a fire could have been ignited by utility equipment but the selective shutoffs prevented them.

Based on last year’s experience and improvements to its grid since then, SCE is expecting a 30% reduction in the number of customers affected by the shutoffs, Harrington said. “That represents about 40,000 fewer customers, and up to half of them should never experience another PSPS.”

Harrington told the CPUC that SCE was “absolutely committed to getting these events right, and we are in a much better position this year at this time then we were last year.”

Pacific Gas and Electric Co. interim President Michael Lewis told the commissioners that the combination utility, now emerged from Chapter 11 bankruptcy, is “ready to exceed your expectations. Today our PSPS events are smaller, shorter and smarter.” More than half of PG&E’s service area and 90% of the counties are in designated high-risk fire areas.

California first responders in the first half of this year had fought nearly 6,000 fires covering more than 200,000 acres. The heart of the wildfire season does not begin until the fall, according to the California Forestry and Fire Protection, aka CalFIRE.

Berlant said the mission is to eliminate preventable utility sparked wildfires. Lamoureux said the agencies have been working with the IOUs to “understand what they are doing to reduce the scope and duration” of PSPSs to prevent the start of fires from electrical lines and equipment in times of high-risk conditions.

“Generally, we are cautiously optimistic about events in 2020,” Lamoureux said. “That’s our hope and what we’re hearing from the utilities. However, we do have concerns after the experience last year which felt like a perpetual PSPS cycle, and it feels to a degree that we are entering a similar cycle this year,” as SCE already had called for three outages.

“It again appears that we’re using a utility PSPS as opposed to a ‘public safety’ PSPS,” he added. “It appears to be more related to reducing liability than to exercising and using the same data we are relying upon to make sure we’re aligned. The data isn’t syncing up.”