The new rules apply to all of the state’s 12 gas storage facilities with collective capacity of 375 Bcf. The cost of compliance in total is estimated at up to $337 million.

The regulations would replace emergency rules that took effect in early 2016 following the blowout of Aliso’s SS#25 well at the 3,200-acre storage field in Southern California. Aliso at the time operated with 114 storage wells and 86 Bcf capacity.

A Southern California Gas Co. spokesperson said the Sempra Energy utility, which owns Aliso Canyon, supports “efforts to enhance the safety of natural gas storage facilities at both the state level and nationally,” and it is generally “supportive of forward-looking laws and regulations that adopt best practices for our storage facilities.”

A Division of Oil, Gas and Geothermal Resources (DOGGR) official told NGI the “final-final” version of the rules cover:

DOGGR chief Ken Harris said the “best science and engineering” was put into the new standards, drawing input from a broad spectrum of the public. The overriding goal is to prevent any future Aliso Canyon-like incidents, he said.

“Our new regulations put the emphasis on proactively preventing leaks, and we believe they are the strongest protocols for natural gas storage in the nation,” he said.

Still pending regarding the Aliso storage well leak is a root cause analysis that DOGGR officials said last Friday is ongoing, as is vetting of each well.

“So far, 57 of the 114 wells have passed the testing protocol and are available for injection and storage,” a DOGGR spokesperson said. Three wells have been plugged and abandoned and an additional 25 are likely to be permanently taken out of service.

“Whatever the final total of wells approved to resume service, Aliso Canyon likely will operate with significantly fewer wells than before the leak occurred in October 2015.”

The long-term fate of Aliso is to be determined by the California Public Utilities Commission. 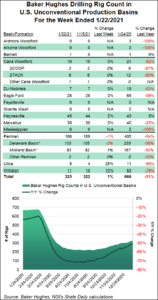 The U.S. rig count increased five units to 378 for the week ending Friday (Jan. 22), with gains distributed across both oil- and natural gas-focused drilling, according to the latest figures from oilfield services provider Baker Hughes Co. (BKR). The United States saw a net increase of three natural gas-directed rigs, along with two oil-directed…