California leaned more heavily on natural gas-fired electricity during the extreme heat wave that blanketed the state earlier this month, according to the Energy Information Administration (EIA). 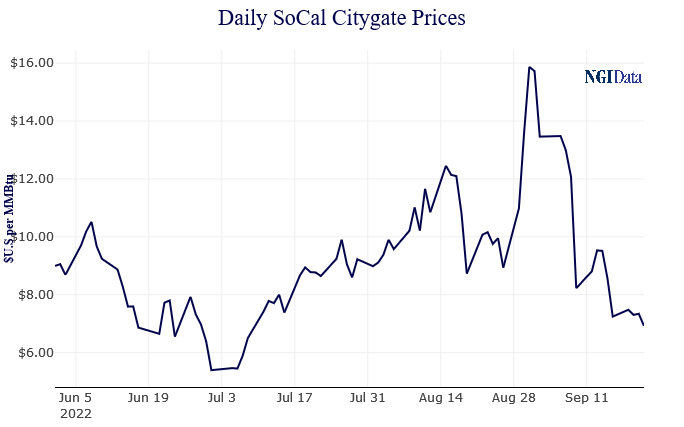 Grid operator CAISO (aka California Independent System Operator) had to urge customers to cut back on electricity use during an extended stretch of sweltering temperatures in early September as demand edged perilously close to available supply.

Driven by air-conditioning use, demand in CAISO’s territory peaked on Sept. 6, setting a new record high in the process, according to a research note published this week by EIA.

As CAISO appealed to customers to conserve electricity to avoid rolling blackouts, the grid operator was simultaneously drawing more electricity from natural gas-fired sources to balance supply with demand, according to EIA.

At times, that meant pulling more than half of its electricity from natural gas.

“For brief periods during the week of Sept. 4, CAISO used natural gas for as much as 60% — and never less than 30% — of the generation mix to meet electricity demand,” EIA analyst M. Tyson Brown wrote. “California typically uses a mix of solar, wind, imports, hydroelectric and natural gas sources for electricity generation,” with the mix varying at different times of day.

In 2022, leading up to the record-setting demand observed during the recent heat wave, California relied on natural gas for 32% of its electricity, according to EIA.

The Golden State’s energy mix also included 40% from solar, wind, nuclear, batteries and other sources. Imports had been accounting for 20% in 2022, with hydroelectric supplying 7%, according to the agency.

“The mix relies slightly more on natural gas during the evening hours from 6-9 p.m., when electricity demand peaks and solar generation wanes,” Brown wrote. “During the week of Sept. 4, however, natural gas contributed nearly one-half of the resource mix in CAISO; nuclear, solar, wind, batteries and other resources decreased to a 24% share.

“In California, natural gas units are often the last resource turned on to meet demand because they can be turned on after the sun sets in the evening when cooling demand remains high,” the analyst added. This means that during the record-high demand, the state turned to “seldom-used (less efficient, more expensive) natural gas units.”

NatGas Continues To ‘Stake Its Position’

Despite this stretch of elevated natural gas consumption, it would be fair to say California is not a fossil fuel-friendly state.

The setback legislation crossed Newsom’s desk along with a flurry of other proposals meant to bolster the California Climate Commitment, the governor’s $54 billion investment package. According to Newsom’s office, the state’s commitment would reduce the state’s oil consumption by 91%, reduce fossil fuel use in buildings and transportation by 92% and cut refinery pollution by 94%.

Even so, natural gas appears poised to continue playing a prominent role in the power stack, at least for now.

“There are downward expectations for natural gas demand in California,” Wood Mackenzie analyst Quinn Schulz told NGI. “Of course, these expectations are reasonable given the competition between renewables and natural gas, as well as the increased efforts toward decarbonization.

“…However, historical gas nominations data suggests that natural gas will remain significant in meeting peak demand in the short-term,” the analyst added.

Looking at average summer natural gas usage in the state over the last four years, the expected downward trend in natural gas demand “hasn’t materialized” with the exception of 2019, according to Schulz.

In fact, using 2017 as a baseline, residential/commercial natural gas demand has “consistently increased” over that time frame.

“These increases were even as high as 10% in 2021 and averaged about 3.7% growth compared to 2017 averages,” Schulz said. “This peak in 2021 could be explained somewhat by Covid lockdowns pushing up demand, but the trend still remains. So while there are some downward pressures on the growth of natural gas demand…natural gas seems to continue to stake its position in the power stack.”