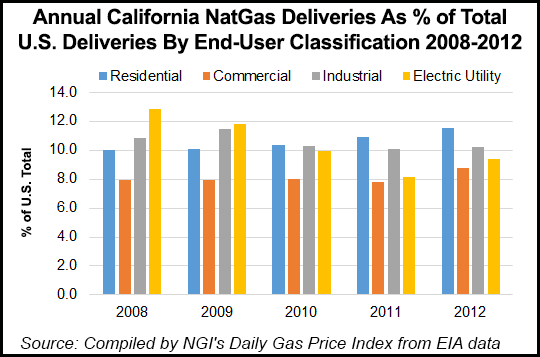 Separately, the California Energy Commission (CEC) on Wednesday approved three grants totaling $623,000 to advance technologies used to monitor the state’s gas pipeline network. The projects include geologic surveys of a sea level rise at a critical levee in Northern California, laser sensor development and the use of ultrasonic measurements.

This is the second of three bills to tighten natural gas pipeline regulations — an earlier one (AB 1937) is already awaiting the governor’s signature (see Daily GPI, Aug. 22). A third bill (SB 1389) authored by Sen. Jerry Hill would eliminate the use of old grandfather clauses in determining the maximum allowable operating pressure for intrastate transmission lines.

“In order to protect public health and the environment, we must keep natural gas in the pipes where it belongs as opposed to letting it leak into the air,” Leno said. “SB 1371 serves this dual purpose by ensuring that leaking gas pipes are repaired quickly and in a cost-efficient manner for consumers.”

EDF California Director Tim O’Connor called the state legislature’s passage “a huge step toward the buildout of a comprehensive strategy in California to reduce methane pollution.” If signed by Gov. Jerry Brown as expected, California will join other state and federal efforts, such as the Colorado methane reduction regulations, O’Connor said.

In terms of the CEC grants, the money was split up with more than half ($325,000) earmarked for the U.S. Geological Survey to gather data using advanced technology on the risks to the natural gas system posed by the failing Delta Island levee infrastructure and long-term sea level rises. Monthly surveys will be conducted on levee roads that account for almost 1,700 kilometers of “high-priority energy infrastructure zones.”

The other two grants go to Physical Sciences Inc. of Pleasanton, CA ($150,000) to develop miniature methane laser sensors for use of gas pipelines, and Palios Corp. of Santa Clara, CA ($148,000) to test a cost-effective, ultrasonic measurement system that would use non-destructive measures to determine the strength of undisturbed and in-place gas transmission pipelines. The latter allows safety checks with minimal service interruptions.