California Resources Corp. (CRC) will continue to stay patient to ride out low commodity prices, selling off assets, and continuing to reduce its billions of dollars of debt, CEO Todd Stevens said on a 3Q2016 earnings conference call Thursday. 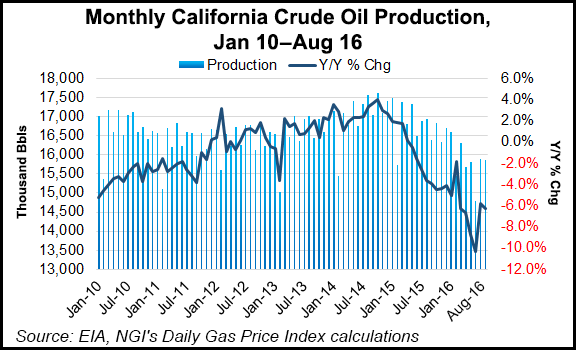 CFO Marshall Smith said natural gas prices in 3Q2016 were up 59% to a seasonal adjusted price of $2.64/Mcf, compared to prices in 2Q2016. “Continuing disruptions to natural gas storage in California are strengthening gas price differentials,” said Smith, adding that gas prices were down nearly 7% compared to the third quarter last year.

CRC’s continuing strategy is to hold production flat, continue to slash debt such as the $625 million cut in 3Q2016, and sell assets if offers raise to better than “fire-sale” levels, Stevens said.

The longer term goal is to get overall debt down to $3-$3.5 billion, and ideally under $3 billion. Since CRC was spun off from Oxy in 2014, its overall debt has been reduced from $6.7 billion to about $5.5 billion today, company officials said.

Stevens deflected questions about why CRC was not selling more of its assets, given it has a relatively large asset base. Stevens in the past has committed to making some sales and then took them off the table at the beginning of this year (see Daily GPI, Jan. 7).

Stevens said “we’re not holding any fire sales, and that’s really the issue. If we could get the right valuation that makes sense and its accretive — and we have sold some modest assets, but nothing material — we’ll pull the trigger on those transactions. For us, it is a matter of doing the right thing and being patient.” The company will stay “opportunistic,” recognizing it is “blessed with a great set of assets.”