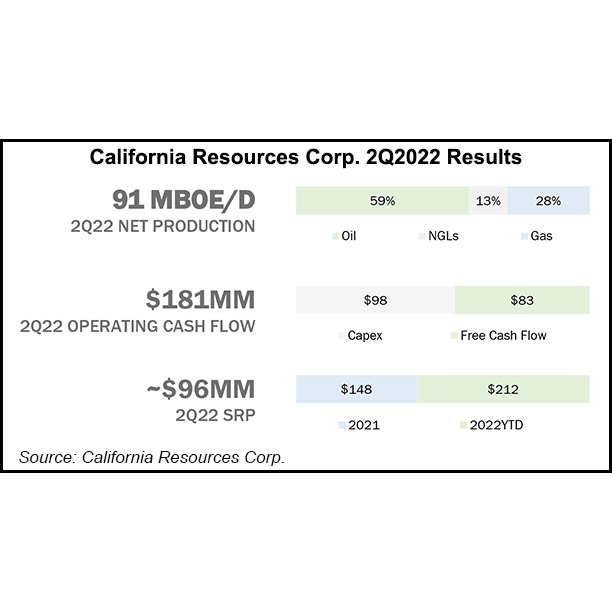 Last week, CRC disclosed a joint venture (JV) with Brookfield Renewable Partners LP, which contributed $500 million to the CCS endeavor with CRC subsidiary Carbon TerraVault. CRC CEO Mac McFarland explained during the second quarter earnings call the benefits of the carbon dioxide (CO2) storage JV. CRC would be majority owner in the JV with a 51% stake.

“Brookfield will contribute $10/ton for their 49% share of the storage assets as they are developed,” McFarland said. The JV is initially targeting the injection of 5 mmty by 2027, with 200 mmt of CO2 storage development. That would “require an estimated $2.5 billion of total capital,” he said.

The initial investment from Brookfield “will either buy pore space, or it will actually invest in capture equipment or any other capital needs within the JV,” McFarland told investors.

CFO Francisco Leon told investors that there is potential for the JV to become a “full-service business…because by having Brookfield as a partner, we are having this funding mechanism and then defining the JV as a storage” or an infrastructure company.

“So that’s capture, midstream and storage, and that’s where the JV is going to be focusing in providing a service at the California emitters, all the way from the emitter to the storage tanks,” he said.

The California Air Resource Board earlier this year issued a draft 2022 Climate Change Scoping Plan. It assumes oil and gas production would be phased out by 2035 after demand is “forced to zero.” While there could be a need for refined oil products through 2045, production beyond 2035 would rely on a massive buildout of CCS projects.

CRC, which is also targeting full scope net-zero emissions by 2045, would “have to be injecting about 20 mmty, and if you just do the conversion math, that gets you to roughly 1 billion mt of storage,” McFarland told investors.

The JV agreement also grants the independent “greater flexibility” with its cash flow, McFarland said. The producer is forecasting about $2.7 billion in after-tax FCF after reinvesting $1.9 billion to maintain total net production over the next five years.

McFarland noted that the exploration and production (E&P) company previously planned to reinvest to keep production “effectively flat, then we would split the free cash flow…50/50 between shareholder initiatives and carbon management.”

Now, following the agreement with Brookfield and with the “significant cash flow generation potential assets, we move into either shareholder initiatives or more investments into oil and gas,” Leon added.

California regulators in early August reached an agreement with the U.S. Department of Interior’s Bureau of Land Management (BLM) to halt new oil and gas leases on public lands in Central California. The Trump administration in 2019 opened more than one million acres for drilling and hydraulic fracturing (fracking).

California Attorney General Rob Bonta said BLM did not evaluate fracking risks or associated mitigation in several Central California counties, including Kern County, where in 2021, production from CRC’s Elk Hills field in the San Joaquin Basin accounted for 40% of total production. Under the settlement, BLM agreed to not lease lands until environmental concerns are reviewed.

CRC, whose operations now span three oil and gas basins in the state, operated three drilling rigs in the San Joaquin in 2Q2022 and one rig in the Los Angeles (LA) Basin. In July, CRC brought a fifth rig online at its LA operations.

Net production fell in 2Q2022 to 91,000 boe/d from 101,000 boe/d during the year-ago period. The decrease reflected the E&P’s exit from its Ventura Basin in late 2021, as well as a drop in production from the San Joaquin, LA and Sacramento acreage.