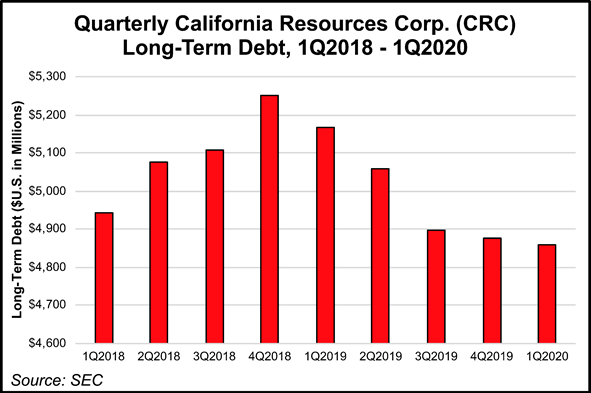 Excessive debt related to its spinoff from Occidental Petroleum Corp. (Oxy), as well as Covid-19’s impact on energy demand, were the principal drivers, according to CEO Todd Stevens.

“We have consistently operated within cash flow, significantly reducing the outsized debt burden we inherited from Oxy, however, today’s unprecedented market conditions require we further reduce debt through a Chapter 11 process,” Stevens said.

CRC has entered a restructuring support agreement with the majority holders of the 2016 and 2017 loans.

Earlier this month, Haynes and Boone LLP reported that the number of North American exploration and production companies seeking bankruptcy protection continued to rise, with close to two dozen operators filing since the start of the year. The oilfield services sector is feeling the pinch, too, as exemplified on Tuesday when Houston-based Hi-Crush Inc., one of the leading Lower 48 northern white sand providers, sought voluntary bankruptcy protection.

Except for a few quarters, CRC has steadily reported losses since it was spun off from Oxy six years ago. In the midst of the red ink, the company formed a series of joint ventures (JV) that allowed it to expand operations from zero to nine rigs in 2017 and begin reducing its oversized debt load.

One JV partner, Ares, has agreed to contribute its equity interest in CRC’s oilfield natural gas-fired generation plant in Elk Hills in return for a stake and notes in the newly restructured company. The power plan, jointly owned by CRC and a unit of Ares, would be 100% owned by CRC when it exits bankruptcy.

Stevens said CRC has a commitment for more than $1 billion in debtor-in-possession (DIP) financing from various creditors to support ongoing operations during the Chapter 11 process. “When approved by the court, DIP financing would also be used to fully refinance CRC’s 2014 revolving credit facility,” he said.

CRC will follow its ongoing strategy of operating within cash flow and existing cash on its balance sheet, and that will enable it to continue ongoing operations during the restructuring, Stevens added.