California’s oil and natural gas industry is pushing back against a report alleging that the state’s largest exploration operator, now mired in bankruptcy, could leave a billion-dollar abandoned well cleanup problem in its wake. 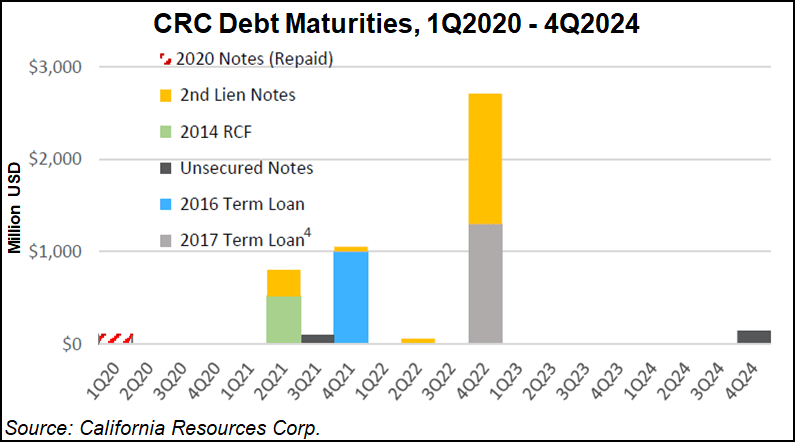 The Sierra Club in a recent report labeled top producer California Resources Corp. (CRC), now in Chapter 11, as a stripper exploration and production company that is trying to squeeze the last drops of oil from mature locations. It cited concerns that CRC’s approach was “not providing much value” in the wake of expanded unconventional drilling techniques.

Sierra Club claimed that more than half of CRC’s 17,900 wells are idle. If the company “fails to close its wells by becoming terminally insolvent, the obligation and ultimate cost of closure will fall to the state,” it said.

WSPA spokesperson Kevin Slagle said the report ignores the fact that “there are regulations, oversight and accountability within the system of laws and agencies that are in place to protect the environment and public health” in California. “Our members have and will continue to meet all obligations to protect health and safety.”

CIPA CEO Rock Zierman said taxpayers do not pay for abandoned or orphan wells as the industry funds the work. “A vibrant energy industry will ensure that these assets are properly managed without taxpayer support.”

CRC Vice President Margita Thompson called the environmental report on the firm “absurd” for promoting greater dependence on foreign oil imports. CRC is awaiting confirmation of its plan of reorganization and expects to emerge from bankruptcy this year.

“Both active and idle wells have an essential role in our life-of-field planning since they enable us to access formations through existing well bores and facilities, reducing our surface footprint, energy use and emissions,” Thompson said.

Given the impacts of the pandemic lockdown, well abandonment permits have outpaced drilling permit applications by nearly two-to-one to date this year.

California Division of Geologic Energy Management’s (CalGEM) Uduak-Joe Ntuk, oil and gas supervisor, said CRC has paid its assessments on time, and the reorganization does not propose discharging any debts or environmental obligations. “There are no orphan wells or deserted facilities due to CRC bankruptcy proceedings…The reorganization plan specifically allows CRC to pay obligations to CalGEM post-bankruptcy in the normal course of operation.”

The bankruptcy “does not pose an immediate threat to public health or the environment.

“CRC still must comply with California’s stringent oil and gas regulations, and that does not change in the event of a bankruptcy. The company also must continue to pay annual per-barrel assessments that fund regulatory oversight activities…”

CRC spokesperson Richard Venn said the company holds interests in about 13,500 gross oil, gas and service wells, “many of which contain multiple productive horizons. We periodically evaluate our idle wells to determine whether they can be returned to service, held for future enhanced oil recovery or induced oil recovery development projects, changed in service types, or permanently abandoned.”

Ntuk said since the state’s oil production has been steadily declining for more than 30 years, the agency has “taken steps to prepare for developments such as bankruptcy filings by operators,” setting policies to actively mitigate financial risk tied to abandoned wells. CRC paid $3.6 million in idle well fees in May and June, according to CalGEM. CRC currently has 7,600 idle wells statewide, and CalGEM has found no hazardous wells.

The state’s Hazardous Idle Deserted Well Abatement Fund has about $14 million available to deal with abandon wells. CalGEM is authorized to spend up to $3 million this fiscal year and $2 million in the next two years.