California regulators on Tuesday proposed to “significantly limit” volumes of natural gas that could be stored in the now shuttered Aliso Canyon field, the state’s largest underground storage facility on 3,600 acres with 86 Bcf capacity. 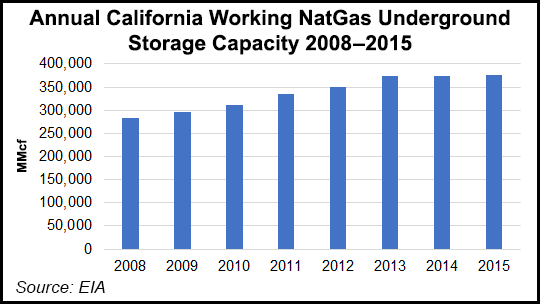 State officials said the Southern California Gas Co. (SoCalGas) facility could reopen, albeit at a fraction of past capacity, as about one-third of the storage wells have passed a battery of tests. Months of review have now been completed by the state, and SoCalGas submitted a detailed report asking to reopen the facility last November.

The Department of Conservation’s Division of Oil, Gas and Geothermal Resources (DOGGR) and the California Public Utilities Commission (CPUC) are proposing to require SoCalGas to meet more stringent safety measures, such as equipping all wells with real-time monitors and alarms, and to protectively encase all of the 114 storage wells that eventually could be allowed to resume gas injections.

“We want to hear the public’s thoughts on the testing and inspections, and the steps being taken to ensure public health, safety and environmental protection,” said DOGGR chief Ken Harris, who also is the state oil/gas supervisor. “The entire facility has undergone extensive inspection and each well has been thoroughly tested with stringent standards that were developed with experts at Lawrence Berkeley, Lawrence Livermore, and Sandia Laboratories.”

The state’s latest review confirmed that 34 of the 114 storage wells have passed the required six-test series, and 79 others have been taken out of service, filled with protective fluid, and are safely isolated from the gas storage field. The additional wells have a year to pass all the tests or be permanently plugged.

In addition to the safety mitigation requirements, state officials said they now believe that Aliso operating at a reduced capacity would be sufficient for gas and electricity reliability in the greater Los Angeles Basin. New conditions SoCalGas would have to meet if the facility is reopened include limiting gas injection/withdrawals to wells’ production tubing (inner steel pipe). Moving gas in and out of storage using the production casing would no longer be allowed.

SoCalGas also would have to ensure:

Harris told reporters during a conference call on Tuesday there is no target date for completing the ongoing investigation into the causes of the leak last year. No new injections would be allowed “until the surrounding communities and concerned public have an opportunity to weigh in.”

Regulators plan to hold public hearings Feb. 1-2 near the Porter Ranch development bordering Aliso Canyon. Some citizen organizations are still hoping to force the facility’s permanent closure. Late Tuesday, the Food & Water Watch (F&WW) and Save Porter Ranch community group reiterated their claims that the 45-year-old gas storage facility cannot be made safe again. “We are prepared to fight to keep the storage facility closed and ensure it is decommissioned,” said F&WW senior organizer Alexandra Nagy.

Save Porter Ranch President Matt Pakucko accused state regulators of trying to “rush” the reopening and claimed that no one knows the cause of last winter’s four-month methane leak.

Elected officials have said they cannot support reinjecting gas at Aliso until the investigation report and public hearings are concluded. Los Angeles County Supervisor Kathryn Barger, who represents the Porter Ranch area, said she can’t support reopening the facility until the causes of the leak are known .

CPUC and DOGGR officials stressed that they will continue to work in tandem “to ensure the safety of the field and will participate in the meetings to discuss the facility’s role in ensuring that the greater Los Angeles area has a reliable supply of natural gas.”

They cast aside concerns about the average age of the wells at Aliso, noting that isn’t a safety factor. “It is all about tests; some of the wells can be old and still be in very good shape, and others may not be, it is really a side-by-side, well-by-well situation,” Harris said.