The California Air Resources Board (CARB) has released a draft update to the state’s climate plan for reducing greenhouse gas emissions (GHG) that it says will accelerate the transition away from natural gas in transportation and use in buildings. 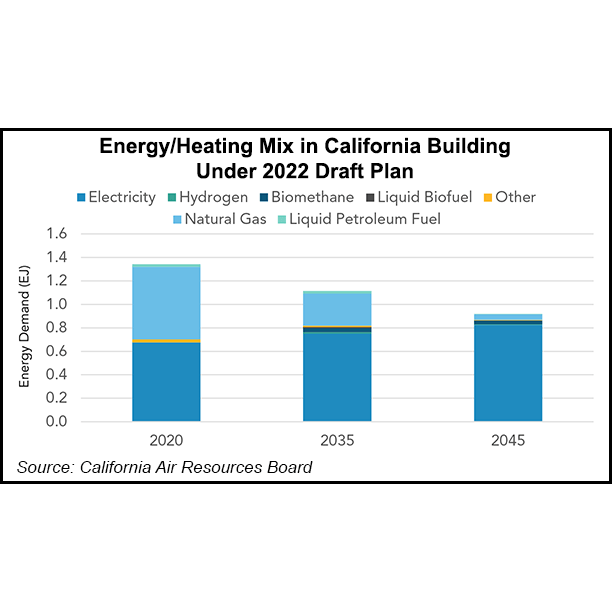 The draft 2022 Climate Change Scoping Plan selected by CARB seeks to lay out a realistic path for California to reduce use of all petroleum products by 90% in 2045 and curtail GHG emissions by 80% in 2050. As a part of that path, the plan involves phasing out or displacing natural gas – referred to by CARB as “fossil gas” – through transition programs and the buildout of alternative fuels.

The proposed plan would effectively ban the sale of natural gas appliances, with the state seeking to require the installation of all-electrical appliances in new homes by 2026 and in new businesses by 2029. Regulators would also try to ensure 100% of new appliances sold in the state were all-electric by 2030.

In combination with its plans to decarbonize transportation, CARB seeks to further reduce natural gas use by assuming that requirements and incentives for all new passenger vehicles in California would be emission-free by 2035.

The draft assumes that at least some gas will still be necessary after 2045 for hard-to-abate industrial sectors and to stabilize power generation during peak periods. However, it also suggests that policy actions will significantly reduce demand for gas to a fraction of current levels.

The gas circulating through the state’s systems under the scoping plan would also be largely renewable natural gas (RNG), created from methane capturing operations or biofuel facilities using waste from wildfire management efforts. Due to the risk of methane leaks from pipelines, the plan does favor a buildout of hydrogen produced with renewable energy over RNG.

By using regulations and incentives to reduce the need for petroleum projects, CARB’s draft assumes oil and gas production would be phased out of the state by 2035 after demand is “forced to zero.” The plan says there could be a need for refined oil products into 2045, but it relies on a massive framework of new carbon capture, utilization and storage (CCUS) projects throughout the state to maintain net-zero carbon levels.

Gov. Gavin Newsom tasked CARB with reviewing the feasibility of eliminating oil and gas production in the state by 2035 after progressing possible bans on unconventional extraction.

The strategic blueprint for reducing greenhouse gas emissions was mandated by the state’s Assembly Bill 32, also called the Global Warming Solutions Act of 2006. The scoping plan must be updated every five years.

The current draft would be the third update to the plan. A public comment period is open until June 24. The state’s Environmental Justice Advisory Committee may also provide input on the plan during this period.

At least one industry group representing California has decried the draft plan since its release. The Western States Petroleum Association (WSPA), which represents a large share of the oil and gas industry in Arizona, California, Nevada, Oregon and Washington, called for CARB to restart its drafting process entirely.

WSPA CEO Catherine Reheis-Boyd said the scoping plan lacked affordable options and realistic choices for California residents and businesses to adapt under the proposed guidelines. Instead, she said, the plan relies on “bans, mandates and regulations that pick winners and losers.

“A new Scoping Plan needs to take into account how Californians really live, and not rely on theory and infrastructure that does not exist,” Reheis-Boyd said.

WSPA filed a lawsuit in March against Oregon and its environmental regulators in response to its climate policy program.

The plan also received criticism from some climate advocates who responded with concern that California’s 20-year roadmap still has gaps for accomplishing reduction in emissions.

Sierra Club’s California organization specifically questioned the plan’s allowance for expanding natural gas infrastructure in the short-term and the use of CCUS to reduce the carbon footprint from the remaining fossil fuels used in the state’s systems. Sierra Club California’s Brandon Dawson, director, said the draft plan relies on “technologies that haven’t been proven” and should be changed to exclude the use of RNG.