Natural gas and other competing alternative transportation fuels were left in the dust on Tuesday after the California Energy Commission (CEC) approved nearly $50 million in zero-emission construction projects, $46.6 million of which is supporting the building of a network of 28 hydrogen fueling stations throughout the state. 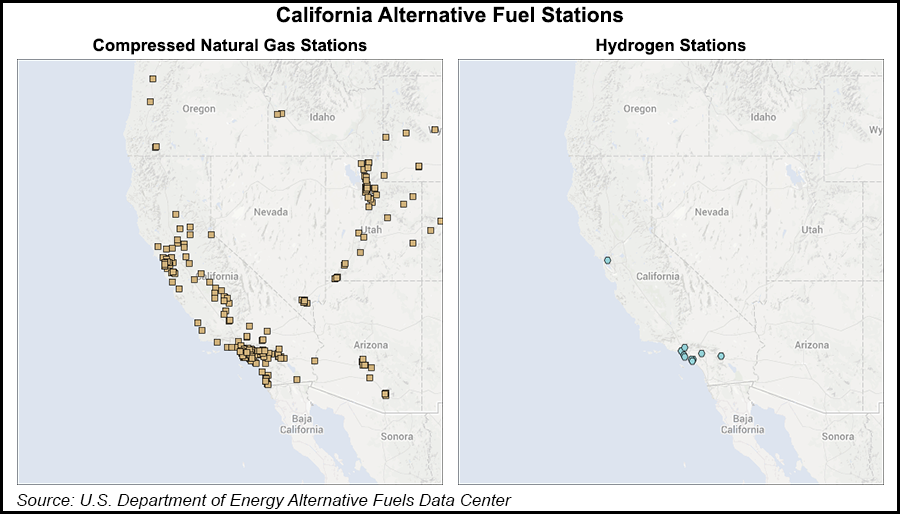 The awards were made by the five-member CEC under the state’s Alternative and Renewable Fuel and Vehicle Technology Program that has awarded $400 million to bolster the state alternative fuel infrastructure, including natural gas vehicles (NGV) and propane. The latest awards would fund hydrogen fueling and electric vehicle charging stations.

A somewhat obscure bill (AB 8) passed by the state legislature last year extended clean vehicle fees that all registered motor vehicle owners in the state pay for “pollution abatement” that goes to funding alternative fuel transportation stations, including NGVs. The bill also mandated that the CEC distribute at least $20 million annually for the building of hydrogen stations specifically. All of this funding is in place for the next 10 years.

The goal now is to build up to 100 hydrogen fueling stations by 2024 in a move to rekindle a California “Hydrogen Highway” program promoted by former Gov. Arnold Schwarzenegger that failed to get off the ground. Since then, current Gov. Jerry Brown has taken another approach getting the California Air Resources Board (CARB), as part of its broad powers to implement the state’s far-reaching 2006 climate change law (AB 32), to try to force oil companies to fund the stations, but eventually it has been shifted to the well-funded CEC alternative/renewable fuel program.

“These projects will accelerate a statewide hydrogen refueling station network that will support the commercial launch of hydrogen fuel cell electric vehicles in 2015,” said a CEC spokesperson, who noted that the state has a zero-emission vehicle goal of getting 1.5 million hydrogen, battery electric, and plug-in EVs on the state roadways by 2025.

Eight organizations are among the recipients for the development of 28 hydrogen fueling stations and one mobile refueler, and they include an existing Southern California suburban compressed natural gas (CNG) station that will be adding the hydrogen option and the Gas Technology Institute (GTI), which is suppose to fabricate a first-of-its-kind mobile hydrogen fueler.

“The infrastructure network is designed to support consumer choices by locating refueling stations and electric chargers in strategic locations throughout California,” the CEC spokesperson said.