California regulators moved Tuesday to close 12 oil and gas underground injection wells in Kern County and are reviewing others to ensure that the state’s drinking water is protected from contamination. 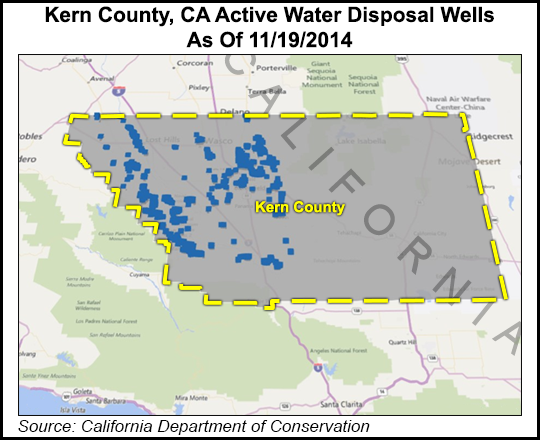 The action is not expected to have any materially significant impact on oil production, and state officials commended producers that were voluntarily addressing the issue (see Daily GPI, Feb. 9).

“As DOGGR noted in its announcement [Tuesday], many of the wells identified today have been inactive or voluntarily shut in. Our view is that DOGGR’s actions are preventative in nature, and there continues to be no evidence that drinking water supplies have been negatively impacted due to injection operations.”

Since mid-2014 state and federal regulators have been reviewing thousands of wastewater disposal and enhanced oil recovery (EOR) wells to determine their potential for contaminating drinking water systems. Where the risk is unacceptable, state officials have said they would shut in the injection wells.

The UIC wells in question were used by six operators to reinject produced water, according to a stepped-up review by DOGGR.

Operators already have voluntarily relinquished their permits for 10 of 12 wells that were identified as potentially harmful.

The California Water Resources Control Board also ordered investigations of the wells being shut in and four that were previously shuttered.

Operators will be required to submit reports characterizing the produced water that was injected into the wells, surveying wells in the immediate surrounding areas, and monitoring/testing other nearby wells.

Last year the state produced 205.3 millions bbl of oil and 3.3 billion barrels of water, which typically is injected back into the reservoir for EOR or to maintain reservoir pressure.

“Some people confuse produced water with the fluid used in hydraulic fracturing; they are two different things,” Bohlen said, adding that since the oil is separated from the water, what is reinjected is cleaner than what came out.

Bohlen said tests to date by the water board have found “no contamination of water used for drinking or agricultural purposes related to underground injection by oil/gas companies, and we intend to keep it that way.”

The state has had authority from the U.S. Environmental Protection Agency (EPA) to regulate underground injection wells since 1983. Of concern are up to 2,500 injection wells that are alleged to have deposited fluids or waste into federally protected aquifers as part of an audit done by EPA several years ago.

DOGGR began with a list of more than 2,500 underground injection wells into “nonexempt” zones not authorized by EPA. The state has said more than 2,000 of those wells were identified as “relatively low priority” because injection was occurring into hydrocarbon-bearing zones that “might qualify” for EPA exemptions.

DOGGR has further determined that among 532 other wells, 176 have been injecting into zones containing water with total dissolved solids of less than 3,000 milligrams/liter, or supplies that could be made drinkable through treatment, in non-hydrocarbon reservoirs.

DOGGR posted a list of potential wells that could be shut in, and the operators are aware they may have to make adjustments. However, Bohlen said “the industry is being very proactive; they are concerned about public health, and we have had a number of meetings with them. This is now well known information about which wells are on the list and operators are responding accordingly.”

He said some of the operators are already asking for permits to drill much deeper into zones that are not protected under the federal Safe Drinking Water Act. “We have engaged industry and they understand the path forward very clearly.”

The California Environmental Protection Agency on Tuesday also issued a report on the state’s past permitting of underground injection wells, concluding that the state and federal authorities had two conflicting agreements regarding permitting.