California oil/natural gas field regulators on Friday opened a nearly two-month comment period for new regulations governing the operation of underground gas storage in the state. Final comments are due by the close of business July 13. 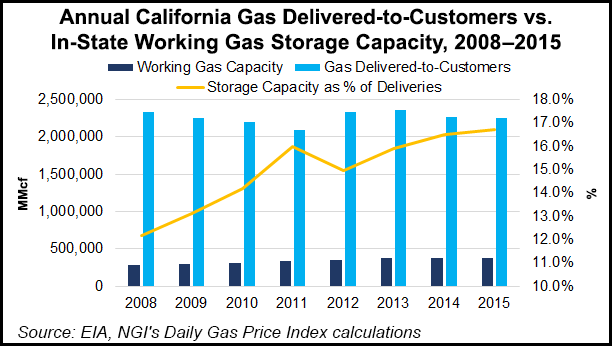 The state Department of Conservation’s Division of Oil, Gas and Geothermal Resources (DOGGR) notified oil/gas stakeholders that it intends to adopt the new regulations after taking into consideration the final round of public comments. In its notice on Friday, DOGGR said the estimated total cost and economic impacts during the first five years of the rules’ effectiveness for the state’s 14 gas storage facilities is in the range of $236-$337 million.

Last summer, DOGGR released preliminary draft permanent regulations covering the state’s gas storage facilities. It was a direct outgrowth of the four-month storage well leak at Southern California Gas Co.’s 86-Bcf capacity Aliso Canyon facility, which was sealed in February 2016, and a related emergency order from Gov. Jerry Brown resulting from the prolonged incident that has had national implications for the industry.

California’s final regulations will eventually replace emergency rules that have been in place since early last year in the immediate aftermath of the Aliso Canyon incident. In the emergency rules, DOGGR required the state’s gas storage facilities to meet safety and reliability measures, including:

“The emergency regulations, which were re-adopted on July 22, 2016, ensure that protective standards are in place while DOGGR completes the permanent rulemaking process for permanent regulations described in this latest notice,” a DOGGR spokesperson said.

At the start of this year, a state law (SB 887) established a number of significant legal requirements for underground gas storage facilities and mandated that DOGGR’s regulations require that no single point of failure poses an immediate threat of loss of control of fluids, along with requiring detailed specifications for ensuring storage well construction integrity.

Under SB 887, storage well operators are required to undertake “a stringent mechanical integrity testing regime” on all gas storage wells by Jan. 1, 2018, and it includes requirements for providing risk management planning and project data to the state. “The bill also requires that operators develop and maintain employee gas storage well training and mentoring programs,” the DOGGR spokesperson said.

In last Friday’s notification to stakeholders, DOGGR reiterated that SB 887 directed it “to promulgate standards for the design, construction, and maintenance of all gas storage wells in California to ensure that any integrity concerns with a gas storage well are identified and addressed before they can become a threat to life, health, property, the climate, or natural resources.”

DOGGR also noted that the regulations have to be “consistent with and more stringent and comprehensive than” the minimum federal standards, which the federal Pipeline and Hazardous Materials Safety Administration established an interim final rule for in January this year.

As models maintained expectations for a shift to colder U.S. temperatures to close out the month of January, natural gas futures reversed their recent losses in early trading Friday. After giving up 6.1 cents in the previous session, the February Nymex contract was up 9.1 cents to $2.757/MMBtu at around 8:40 a.m. ET. Recent weather…