California utilities will be required to supply an increasing percentage of renewable natural gas (RNG), aka biomethane, to their customers following a decision last Thursday by state regulators. 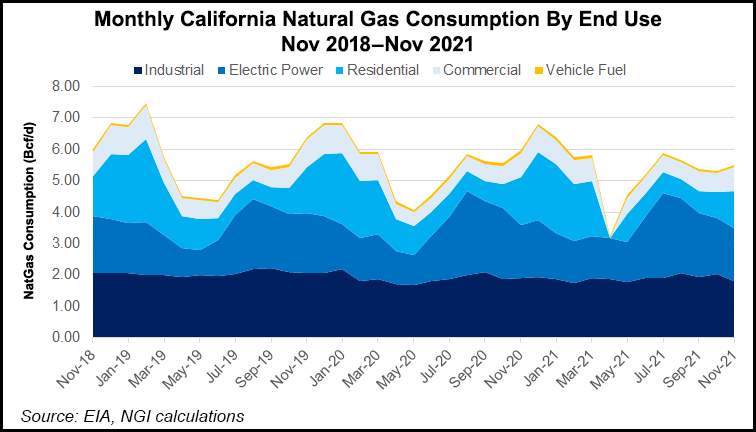 The California Public Utilities Commission (CPUC) set biomethane targets for utilities in an effort to reach the state’s goal of a 40% reduction in methane and other short-lived climate pollutants (SLCP) versus 2013 levels by 2030.

The medium-term 2030 biomethane procurement target is 72.8 Bcf/year, equal to about 12% of the state’s residential and commercial natural gas consumption in 2020.

“Tackling methane and other short-lived climate pollutants is critical given our climate crisis,” said commissioner Clifford Rechtschaffen. “This decision will reduce emissions from some of the state’s leading methane sources.”

The short-term 2025 procurement target is 17.6 Bcf, “which corresponds to 8 million tons of organic waste diverted annually from landfills,” regulators said. “Each utility will be responsible for procuring a percentage of the total in accordance with its proportionate share of natural gas deliveries.”

Because biomethane from dairies is already incentivized by other state programs, the latest decision mainly targets landfill gas, regulators said.

Regulators explained that, “Renewable gas procurement will reduce otherwise uncontrolled methane and black carbon emissions in our waste, landfill, agricultural and forest management sectors.” These sectors account for more than 75% of the state’s methane emissions, according to California Air Resources Board 2019 data.

“Reducing SLCPs, which are a far more potent greenhouse gas than carbon dioxide, is one of the most effective ways to slow the pace of climate change,” CPUC said.

Decarbonization is a formidable challenge ‘because carbon has been the input and output of so much of our economy for so long,” said CPUC President Alice Busching Reynolds. “This reality comes into even more focus as we move beyond the easier first steps into the more complex ones. This decision considers a variety of different interests and viewpoints and strikes a good balance to advance the critical goal of decarbonization.”

Commissioner Darcie Houck added, “Through this decision, we ensure timely action on short-lived climate pollutants in a cost-effective manner.”

The Sempra subsidiary is the largest gas distribution utility in the United States.

SoCalGas has set a goal to deliver 20% RNG by 2030. The company recorded over 4% in RNG deliveries in 2021, management said Friday.

“The CPUC’s decision today will help California to address the single most urgent climate issue, which is the reduction of climate super pollutants methane and black carbon,” said the Bioenergy Association of California’s Julia Levin, executive director. “Requiring utilities to procure biomethane generated from organic waste will help to reduce landfill waste, open burning of agricultural and forest waste, and wildfires, which in turn provides enormous benefits for public health and the climate.”