If there were any doubts about California’s climate change-driven shift away from natural gas-fired electric generation, a review of pending power plant projects at the California Energy Commission (CEC) makes the trend crystal clear. 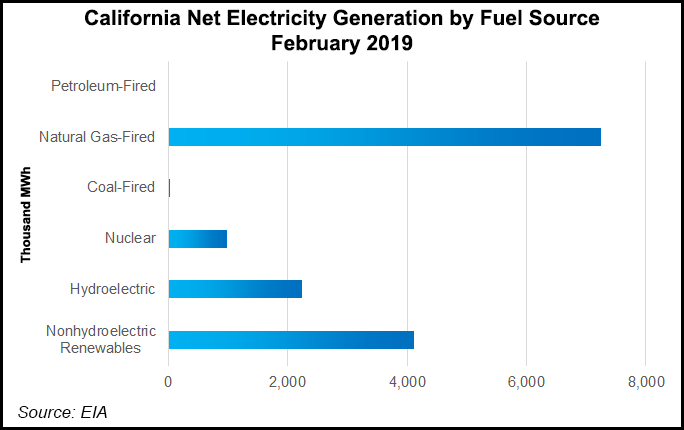 There have been few, if any, gas-fired projects proposed since 2015, and none in the past two years, according to CEC spokesperson Michael Ward. Not that long ago, there was a steady stream of new gas-fired power plant projects in the queue, following the 2000-2001 western energy market collapse.

A recent example of the trend emerged last week when the Calpine Corp. Mission Rock Energy Center project in Ventura County withdrew an application dating back to 2015. The project called for a 255 MW generation site where two major coastal gas-fired plants are set to close because of California’s ban on the use of sea water-cooled generation.

Mission Rock was designed as gas-fired, simple-cycle peaking units with co-located battery storage units that would have delivered an additional 25 MW of generation. It was also going to incorporate an advanced feature called “synchronous condenser technology,” featuring special motors that are used in high-voltage direct current conversion.

Technically, the CEC website still lists Mission Rock as “suspended,” as does AES Corp.’s proposal to replace a long-time, sea water-cooled generation plant at Redondo Beach in Southern California with a 500 MW gas-fired complex on part of the existing site. Along with those two 575 MW suspended projects, the CEC lists another 10 gas-fired projects totaling 3,100 MW as “delayed.”

In lieu of the gas-fired generation, state policy now emphasizes efficiency programs, renewables and increased storage as was highlighted earlier in the month with the advancement of the state’s Senate Bill (SB) 772 that would facilitate a multi-billion dollar pumped storage project adjacent to a national park on the edge of the high desert in Southern California.

SB 772, which has been amended and ordered to a second reading in the Senate, would facilitate plans by Florida-based NextEra Energy to proceed with its $2.5 billion Eagle Mountain hydropower project slated for a site adjacent to Joshua Tree National Park. It has stirred opposition from environmental groups.

In its current form, the proposal does not require hydropower use, instead it requires the California Independent System Operator to seek competitive bids by mid-2022 to provide “long-duration energy storage projects that in aggregate have at least 2,000 MW-2,400 MW of capacity.”

California’s energy policies are among the most aggressive in the country. Legislation was enacted last year to increase the use of renewable energy to 60% by 2030. The law also established a 100% mandate that requires utilities to procure all their electricity from clean energy sources by 2045.