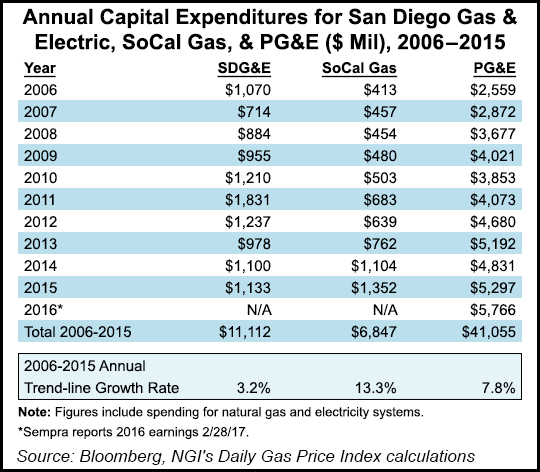 SoCalGas and PG&E have had pipeline safety enhancement programs on a multi-billion-dollar scale since the rupture and explosion of the PG&E transmission pipeline in San Bruno, CA, more than six years ago. State regulators and stepped-up federal pipeline requirements are both in play in the ongoing annual programs.

With the added safety focus on its closed Aliso Canyon underground gas storage facility near Los Angeles, SoCalGas plans to spend about $1.2 billion for improvements to its distribution, transmission and storage systems along with various pipeline safety programs. SoCalGas operates 101,000 miles of gas pipelines.

California regulators last year approved nearly $950 million in increased rates to support PG&E gas storage and transmission pipeline operations. The approval, however, did not include a pending $850 million disallowance associated with the combination utility’s identified shortcomings in handling the San Bruno pipeline failure.

The new valves would allow gas control operators at the Los Angeles-based Sempra Energy gas-only utility to “respond more quickly if gas flow needs to be shut off in an emergency,” a spokesperson said. “The effort is part of the pipeline safety enhancement plan. SoCalGas has replaced or retrofitted more than 100 valve locations since the stepped up pipeline safety effort was launched five years ago.”

The RCVs and ASVs represent the latest technology in the industry, and getting them deployed throughout the utility systems in California has been a big push since the San Bruno incident.

“SoCalGas uses both of these technologies throughout its pipeline system at strategic locations,” the spokesperson said. “As the company continues to upgrade and retrofit valves with RCV and ASV technology, operators will have more flexibility and can respond more quickly if a valve suddenly needs to be closed.”

“It carries high volumes of gas near population centers, and the tragic San Bruno explosion is a constant reminder of the need for safe operation of the system,” Peterman said at the time.

The state regulator acknowledged that dozens of stakeholders and consumer advocates involved in PG&E’s rate case argued that its request was too high. “But there was also a broad consensus that the work needs to be completed to improve the overall safety of the PG&E system,” Peterman said.