A group of California state senators are getting squarely behind an effort to increase funding to reduce emissions from trucks and buses, the source of more than a quarter of the state’s greenhouse gas (GHG) emissions, which are the target of the state’s aggressive climate change regulations. They are advocating up to $1 billion from the legislature as it winds up its session for the year Sept. 15. 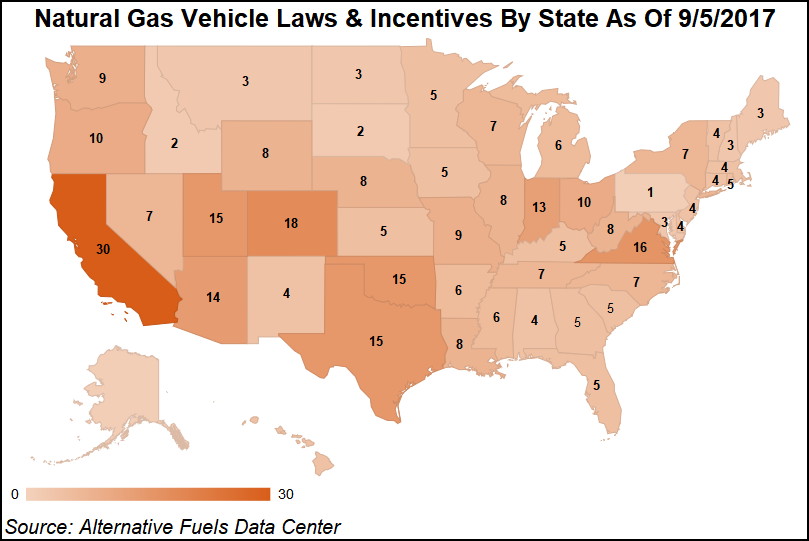 Low-nitrogen oxide (NOx) engine renewable natural gas (RNG)-fueled trucks and buses are among the zero and near-zero emission technologies being advocated by the state lawmakers, according to CALSTART, a clean transportation technology industry group and potent state lobbying organization.

CALSTART Senior Vice President Bill Van Amburg said the state and industry have reached “a pivotal point” where technology is emerging to “move toward a future where trucks and buses produce either zero or virtually zero emissions.”

State Sens. Ricardo Lara, Richard Pan, Nancy Skinner, and Bob Wiechowski are proposing to get the funding from California’s GHG cap-and-trade system, which last month sold out its quarterly auction at all-time record high prices for the pollution credits. “This would amount to a tripling of the amount of funds spent last year,” a CALSTART spokesperson said.

Van Amburg said that in addition to public health/climate change benefits, California is also seeing economic benefits in pushing clean transportation. “Companies are moving to California to build trucks and buses because this is where the market is growing the fastest,” he said.

According to CALSTART, California now has more than 3,200 hybrid, electric, fuel cell and low-NOx natural gas vehicle (NGV) trucks and buses on the road based on earlier investments.

Among the grants are $4.6 million to the Center for Transportation and the Environment in Atlanta and $3.8 million to the Metropolitan Energy Center Inc. in Kansas City, MO. The latter will support both alternative fuel vehicle development and supporting infrastructure in three states — Missouri, Kansas and Colorado.

In the NGV fueling space for both compressed natural gas (CNG) and liquefied natural gas, a combination of expanding lines of fleet vehicles and maturity of NGV use is creating a niche market of sorts for the upgrade and expanding of fueling stations as evidenced in an ongoing push by fueling providers such as Ohio-based InsightFuel.

“Stations built 10-15 years ago were designed with material available at the time,” according to a post on InsightFuel’s blog. “This means smaller diameter tubes, less efficient gas flow and slower filling rates.” The company, formed last year, is bidding to upgrade and repair facilities, bringing older stations into compliance with the latest standards for NGV fueling facilities.

Speaking for the trade groups in Washington, DC, NGVAmerica, Graham Barker told NGI that normally the natural gas fueling equipment is good for 20 years, but a lot of time “it gets to the point that an operator has outgrown the facility.” With the increased focus on heavy duty fleets, Barker, the regional sales manager for ANGI Energy Systems, indicated expansions of stations are growing.

“There is certainly a niche market, but I think it is probably pushed by the people doing maintenance on that type of equipment, so I think it’s more regional,” he said. “We’ve got a couple of big projects, two large transportation sites in the Northeast that have had their equipment for 18 to 20 years. We’re focused on the replacement side, but not too much on the maintenance.”

Barker thinks there is a potential evolving market, but it varies regionally. He sees California with an older portfolio of stations as being one place there could be more activity. “I sold equipment in my past life there 20 years ago that is still working,” Barker said. A spokesperson for Newport Beach, CA-based Clean Energy Fuels Corp. said the firm is doing some repairs and upgrades in the state without giving any specifics.

Regional differences in pressures and flows of local gas distribution service can vary as in Northeast urban areas (Boston, New York City and Philadelphia) where they are “quite low,” making expansions less likely in those specific areas. “It can be hard to upgrade those stations,” Barker said.

In the new CNG fueling space, Clean Energy Fuels said earlier in August it was awarded a $2.8 million design/build contract for a regional NGV fueling installation in Portage County, OH. The facility will support the Portage Area Regional Transportation Authority public transit fleet and be open to the general public.

The transit agency will be purchasing eight new CNG buses with assistance from a state diesel emissions reduction grant under the state’s congestion mitigation/air quality program supporting the replacement and refurbishing of aging diesel engines.

“One of the benefits of operating the nation’s largest network of natural gas fueling stations is the wealth of experience our employees have gained,” said a Clean Energy spokesperson. “And that experience was recently recognized by the awarding of another station build contract.”

In Canada, the fuel tank maker CNG Cylinders International (CNGci) has earned Canadian registration approval authorizing its products’ safety for any boiler, pressure vessel or fitting that operates at 15 psi or greater from the province of Alberta, adding to similar approvals from British Columbia and Ontario.

The approval will allow the company to expand its market, a CNGci spokesperson said. The company is one of the industry’s major producers of large-diameter Type-3 cylinders, touting technological advantages in this global part of the NGV market. Its technology claims to get more diesel-gallon-equivalents of natural gas in the cylinder under fast-fill fueling conditions.