Nationally, July bidweek averages slipped, but those traders and marketers fortunate enough to be selling gas to the “hot” California market saw bidweek quotes rise well into double digits. Outside of the West, strong production, temperate weather and a continuous stream of weekly triple-digit storage injections combined to push NGI’s National July Bidweek Average down 10 cents from June bidweek to $4.02. 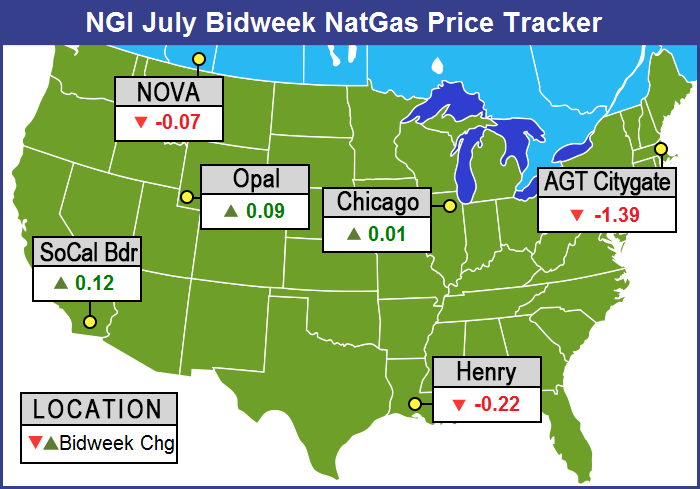 California and pipelines moving gas west proved to be strong performers. SoCal Border bidweek gas was seen at $4.69, up 12 cents, and Malin and all California market points were up about a dime. Gas headed to California from West Texas also rose. July bidweek on El Paso Permian was $4.43, up 12 cents, and on Transwestern, bidweek came in at $4.32, up 13 cents.

During the month of June California baked. Well above normal accumulations of cooling degree days (CDD) were tallied at major California cities. Sacramento recorded 268 CDD, well above its norm of 203 for June, and Burbank sweltered under 186 CDD, significantly more than its 148 CDD average, according to AccuWeather.com. Bakersfield garnered a hefty 503 CDD, much higher than its normal June accumulation of 378 CDD.

The typically volatile Northeast held title to the week’s greatest loser with bidweek at the Algonquin Citygates falling $1.39 to average $4.19 and bidweek volumes on Tennessee Zone 6 200 L dropping 94 cents to $4.15.

The weakness of most of the market was also evident in the natural gas futures arena, where July futures expired at $4.400, down 21.9 cents from the June futures settlement.

A Great Lakes marketer lamented his company’s bidweek market timing. “For basis we were looking at 28 cents on both Michcon and Consumers, but one package was done at 24.5 cents. We triggered that deal on Thursday’s July futures expiration earlier in the day, and if we had stuck with settlement plus 24.5 cents we would have paid less by about 7 cents.”

“Typically traders push the market up at the end of the day, but this time they didn’t,” the marketer said.

An industry pipeline veteran saw utilities conducting business as usual. “I think the ratchets everybody has on their storage are in place to max out injections. Typically you use first of the month gas to do that, but pipelines usually require you to be down to zero by the end of March. Some utilities may have the flexibility to roll gas to the next season.”

Those ratchets have been working overtime in the Northeast. With the country’s natural gas storage network refilling faster than expected and analysts calling for a mild summer to further tamp down demand for the resource from the power generation sector, Northeast natural gas prices in the forward market have been making their way lower in recent weeks.

Coming off of Thursday’s 110 Bcf injection storage report for the week ending June 20, the natural gas market has now seen seven consecutive triple-digit builds, with most of them coming in higher than expected. After being slashed to a low of 822 Bcf of working gas in underground storage at the end of March following the brutal 2013-2014 winter heating season, market watchers — who were wary at the start of injection season — are beginning to show some optimism that the caverns may be refilled in time for the 2014-2015 winter heating period.

Teri Viswanath, who directs natural gas commodity strategy for BNP Paribas, said last Friday morning that an abundance of bearish fundamentals is currently weighing down prices, despite the fact that near-term temperature outlooks appear warmer, which should increase the week-on-week demand for electric power.

Amid the glut of gas, Northeast points have been plunging to new depths. According to NGI’s Forward Look published June 27, Algonquin Citygates were priced at -$0.197 below the Henry Hub, down more than 63 cents from what was a positive 44-cent basis on June 2. Looking further out the curve, the price softness was also felt in the winter strip where, according to NGI, Algonquin basis prices for the Nov-March strip fell about 79 cents to $9.652 as of Thursday’s trading. The Algonquin summer 2015 basis strip fared little better, dropping from $0.124 above the Henry Hub on June 2 to -$0.091 on June 26.

“Across all of the Forward Look points, the trend for the July basis over the month of June was one of decline with volatility tapering slightly toward the end of the month,” NGI market analyst Nathan Harrison added. “Overall, points are generally sitting lower than the Hub due to the swell of natural gas out of the Marcellus Shale, which shackled prices across the Northeast.”

By the end of bidweek Monday, physical gas for Tuesday delivery jumped higher led mainly by weather-driven gains in the East and Northeast. Forecasters called for warm, humid conditions across major eastern power grids, and a strong power environment helped buttress the spot gas market. Gains also hit triple digits in the Mid-Atlantic, and more modest advances were seen in the Great Lakes and Midwest as well as the producing regions. The overall market gain came in well ahead of 20 cents. Futures trading was less enthusiastic. August settled at $4.461, up 5.2 cents, and September gained 5.1 cents to $4.446.

Futures traders didn’t see much significance to the day’s 5-cent advance. “We are still in this range of $4.25 to $4.75,” said a New York floor trader. He added that one way to make money in what seems to be a rangebound market would be to sell some volatility, out-of-the-money puts and calls and let time decay set in.

If the conclusions of some are correct, short-term bulls may have to go into hibernation. “Natural gas settled lower across the board. Gas has been steadily moving lower after failing to push above key resistance ($4.80) earlier this month, [and] at week’s end, we were approaching the bottom side of its recent trading range,” said Mike DeVooght, president of DEVO Capital, in a weekly note to clients.

“Gas has been under pressure the past couple weeks, primarily because of higher than anticipated storage injections and the lack of any significant cooling demand. Many that have become bullish on gas prices have done so because they anticipate ending the summer at historically low storage levels. That may very well be the case if we don’t have a cool summer, but if we do, we will start to see the deficit continue to tighten, which will take wind out of the short-term bull sails. To have a substantial bull market, we feel we need to see an uptick in demand to offset the steady production increase we are experiencing in the U.S. We could see short-term weather-related spikes, but we still feel selling rallies above $4.50 for producers is an attractive forward selling level.”

DeVooght counsels end-users and trading accounts to stand aside and said those with exposure to lower prices should hold the balance of a short summer strip initiated at $4.20 to $4.30. A second short summer strip begun at $4.50 should also be held.

The remainder of the summer strip settled Friday at $4.394.

Weather forecasts across the East into the Ohio Valley and Midwest called for sultry summertime weather. Looking at the New England power grid forecaster WSI Corp. predicted “Summer weather is expected this week. Hot and increasing humid conditions are expected through the middle of the week, though this air-mass will likely fuel scattered storms across northern areas each day. A cold front is expected to slowly slide across the Northeast during the end of the week with rounds of heavy showers and storms, [and] period rainfall amounts may locally exceed 1”. It forecast that “Highs will generally warm into the 80s to low 90s. Lows may range in the 60s to low 70s. Humidity levels should remain high ahead of the cold front during the end of the week, but wet weather may knock temps down into the mid 70s to mid 80s.

Joe Bastardi, meteorologist at WeatherBELL Analytics, said there is little in the way of change in the morning WeatherBELL 20-day forecast. “Days one to five: major cold shot down Plains pushes into the East, ending the warm surge while the West warms, [and] Days six to 15: pattern remains transient. Forecast based on pattern repetition.” According to the NOAA Climate Forecast System “Days 15-35 are very cool.”

WeatherBELL figures show CDD requirements for the next 15 days at about normal. WeatherBELL predicts nationally an accumulation of 162.2, fewer than last year’s 174.6, about right in line with the 30-year average of 159.6.

Tom Saal, vice president at INTL FC Stone, in his work with Market Profile said, “Weekly Market Profiles show higher-priced untested Value Areas to be tested.” He expects the market to test last week’s value area at $4.453 to 4.581 before moving on and “eventually” testing $4.654 to $4.758. “Back years, Cal’15, Cal’17 & Cal’19 are getting oversold; buyers be ready.”