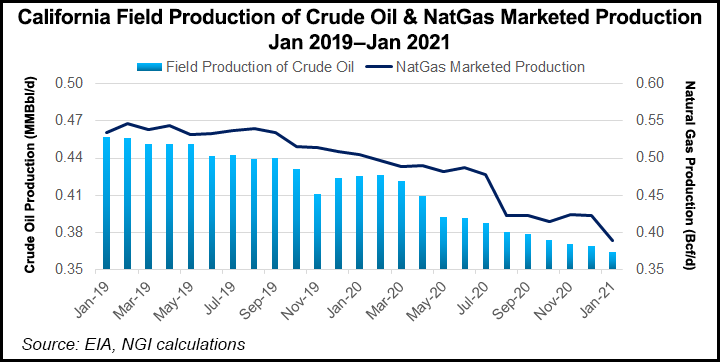 The governor said he chose the regulatory route after a legislative attempt earlier this month again failed. He has directed the Department of Conservation’s Geologic Energy Management Division (CalGEM) to begin the process.

Newsom also requested that the California Air Resources Board (CARB) analyze pathways to phase out oil extraction by 2045. The Democratic governor has said long-term he sees no future for oil and gas.

“The climate crisis is real, and we continue to see the signs every day,” Newsom said. “As we move to swiftly decarbonize our transportation sector and create a healthier future for our children, I’ve made it clear I don’t see a role for fracking in that future and, similarly, believe that California needs to move beyond oil.”

CalGEM is initiating the rulemaking, according to state Oil & Gas Supervisor Uduak-Joe Ntuk.

According to CalGEM, permit approvals and resulting hydraulic fracturing activity are at the lowest level since California’s legislature enacted a bill in 2014 to strengthen

CARB will evaluate how to phase out oil extraction by 2045 through the state’s Climate Change Scoping Plan, what Newsom calls “a comprehensive, multi-year regulatory and programmatic plan to achieve required reductions in greenhouse gas emissions.”

The Western States Petroleum Association (WSPA) intends to fight the mandate. CEO Catherine Reheis-Boyd called Newsom’s action “harmful and unlawful” and said the governor had “chosen to ignore science, data and factors to govern by bans, mandates and personal fiat.”

“Meeting significant climate targets will require large scale projects like carbon capture and using idle wells to store back-up energy. Investment in these climate innovations will only be made possible if our industry is able to operate in California,” he said.

According to CalGEM, there are 1,103 oil and gas leases in Los Angeles, and 579 operators, though not all of them are actively producing. The city’s wells produced more than 2.1 million bbl in 2020, about 14% of the state oil’s production, said spokesperson Don Drysdale.

Coalition for Clean Air Policy Director Bill Magavern said Newsom’s actions “do not do everything necessary to make that transition happen,” however, “they do set in motion the process of managing the decline of oil extraction in California.”

Natural Resources Defense Council Inc. senior attorney Ann Alexanderalso  praised Newsom, saying he is “acknowledging that California needs to phase out its dinosaur oil extraction industry…while protecting communities. For too long, California has been taking the questionable path of trying to meet its climate targets while producing some of the most carbon-intense oil in the world.”