Robust crude oil production driven by the shale revolution has produced significant increases in the railroad shipment of oil, and in the next few years that means an almost quantum leap in shipments to California’s major West Coast refineries, according to state energy projections. In two years, more than a quarter of the oil processed is expected to come via rail. 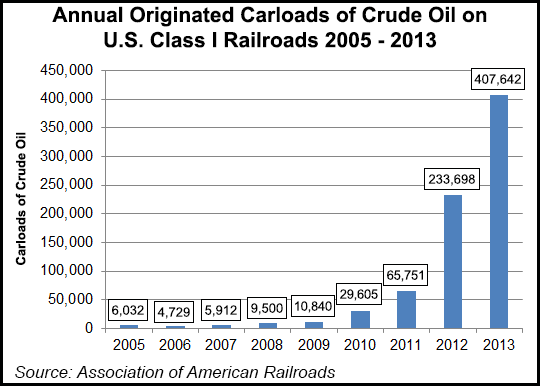 The California Energy Commission (CEC) regularly tracks oil imports into the state via rail and marine transport, including shipments to the state’s refineries, but the breakdown by refinery is not made public due to proprietary considerations, a CEC spokesperson told NGI‘s Shale Daily. The CEC is projecting a big increase in crude shipped by rail in 2016 if all six crude-rail refinery receiving projects now being pursued get constructed.

Last year, the state statistics show that about 1.1% (6.1 million bbl) of the crude processed in California was delivered by rail. Refiners in the state received less than 1% of their total crude volumes via rail, and half of that volume — about 1 million bbl — came from the Bakken Shale in North Dakota.

“The [CEC] does not forecast crude oil rail imports; however, if all six of the crude-by-rail projects currently being pursued in California are all constructed and operated at full capacity, the amount of crude oil being imported via rail cars could rise to about 27% of the total [oil] processed by California refineries by 2016,” CEC said.

The state’s refineries process about 1.6 million b/d, and the combined capacity of the five largest crude-by-rail projects would amount to 400,000 b/d, the CEC said.

Prospects for greatly increased rail shipments into the state have stirred concerns and actions from governmental and environmental officials. Gov. Jerry Brown at the beginning of the year earmarked $6.7 million in his fiscal 2014-2015 budget for rail oil spill clean up purposes (see Shale Daily, Jan. 10).

CEC data show rail-shipped crude is handled at seven different locations in the state. Burlington Northern Santa Fe railroad has three of them: Kinder Morgan, Richmond; SAV Patriot, Sacramento; and Kern oil in Bakersfield. Rail deliveries are also received at refineries in Carson, Long Beach and Vernon in Southern California. In addition, California-produced crude is shipped from a facility in the San Ardo oilfield in southern Monterey County for delivery in Southern California.

“The majority of the increase in crude-by-rail activity has occurred in Southern California locations,” according to the CEC. Volumes by rail reached 1.18 million bbl in December, the CEC said.

There are no oil pipelines from other states or Mexico bringing oil into California, and no imports are made via trucks, so crude oil comes in either via rail or marine transport from Canada.