The effect of this winter’s harsh weather for much of the nation, which has pushed up natural gas demand, particularly in the power generation sector, as well as prices, has spilled over into drought-ridden California where independent generators last Tuesday sought relief from FERC. 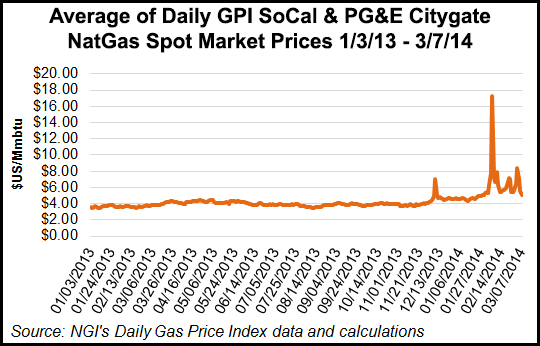 It turns out some cost-recovery methods used by the California Independent System Operator (CAISO) for various gas-fired generation plants that have must-run status with the state grid operator do not allow for sustained fuel price spikes as have been experienced in the first two months this year.

As a result, a group of generators, including NRG Energy, Dynegy Inc. and others sought help from the Federal Energy Regulatory Commission in an emergency request asking for a waiver from the restrictions at CAISO, whose rules and tariffs are overseen by the federal regulators. The generators contend that they only want what FERC already has granted in a similar waiver at PJM in the Northeast.

The generators do acknowledge in their filing that CAISO has recognized and reacted to the gas price spikes with a Feb. 21 technical bulletin, stating the grid operator’s intent to seek tariff waivers “to address atypical and significant increases in natural gas prices.” The generators, however, view the CAISO waiver request as inadequate because it doesn’t solve a time lag problem.

The parties, called Indicated CAISO Suppliers, are requesting that FERC order a waiver immediately and that the waiver remain in effect through March.

The pleading to FERC cites several price spikes and a series of supply disruptions on the Pacific Gas and Electric Co. (PG&E) and Southern California Gas Co. (SoCalGas) transmission pipeline systems in California have plagued the generation sector so far this year.

“California’s natural gas markets have also experienced extraordinary and, indeed, unprecedented price volatility this winter both due to weather events in and around California and the diversion of natural gas supplies in response to severe weather conditions in other parts of the country,” said the generators’ filing, noting exceptional volatility in the early part of February.

An example cited Feb. 6 as a time when the generators were paying $15-40/MMBtu for gas, and CAISO rules and methodology would allow for gas costs no higher than $10/MMBtu.

“To make matters worse, both the SoCalGas and PG&E gas transmission and distribution systems have experienced serious operational constraints over the past two months,” the generators told FERC.

As a result, the generators contend that this has forced both SoCalGas and PG&E to place what they call “significant restrictions” on the utilities’ noncore customers, which include almost all of the major gas-fired generation plants.