Shadowing recent federal data on drought-driven upswings in the use of natural gas for power generation, the California Energy Commission (CEC) crunched some of its own statistics and found that the shift to gas preceded both the three-year drought and the closure of the San Onofre Nuclear Generating Station (SONGS) last year. 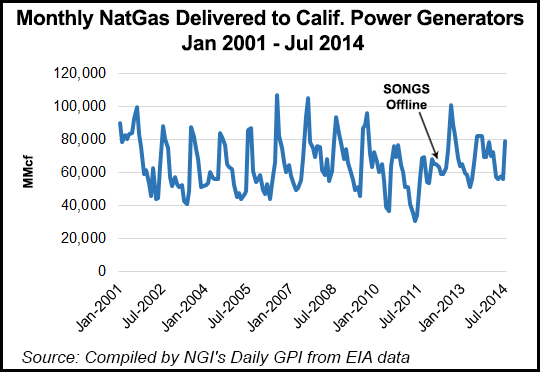 The U.S. Energy Information Administration (EIA) recently reported that California’s drought has cut hydroelectric supplies in half and correspondingly driven up the amounts of gas-fired and renewable generation (see Daily GPI, Oct. 7). The CEC did its own analysis of electricity being generated from all types of fuel sources within the California Independent System Operator’s (CAISO) grid, which accounts for 80% of the state’s power.

Covering the period of May 2010 (in the last year of normal hydroelectric supplies) through September 2014, the CEC data shows average monthly gas-fired generation increased by 1.8 million MWh after SONGS went offline almost three years ago (see Daily GPI, Feb. 7, 2012). At the same time, nuclear generation in the state dropped by 1.5 million MWh, so gas-fired generation was filling in for more than just the nuclear plant’s outage.

A CEC official told NGI that “despite the SONGS outage and drought conditions, there is no obvious increase in imported power into the CAISO grid.” Thus, she said, “there seems to be some general increase in thermal [natural gas] generation since the loss of SONGS that appears to predate the drought conditions.”

California’s proportion of electricity supplied from hydroelectric sources has been declining from peaks in the 1950s, when water accounted for more than half of the state’s power supplies. “Today, in-state hydroelectric generation varies from about 10% to 20% of supply with a typical non-drought year providing about 14% of California’s electricity supply,” the CEC official said.

A combination of the state’s aggressive energy efficiency programs and increased use of renewables and gas-fired power has reduced the state’s reliance on hydroelectricity. The CEC data showed 31.7 million MWh of hydropower in 2010, compared to an estimate for this year of 14.7 million, or less than half of the supplies four years earlier.

“Since May 2011, in-state hydroelectricity has shown a steady decline until now,” the CEC said. However, a combination of hydro supplies from the Pacific Northwest, renewables and natural gas more than filled the gap left by the decline in in-state supplies this summer.

“The current drought is as severe as the 1976-77 drought or the six-year-long dry period of 1987-92 when it comes to hydroelectric production,” the CEC report said. “However, the state’s greater diversity of electricity supply developed since 1976-77 allows for greater flexibility in providing electricity to meet demand.”

CEC predicts that the drought’s impact on power supplies will lessen as more renewables, which are less dependent on water, come online.