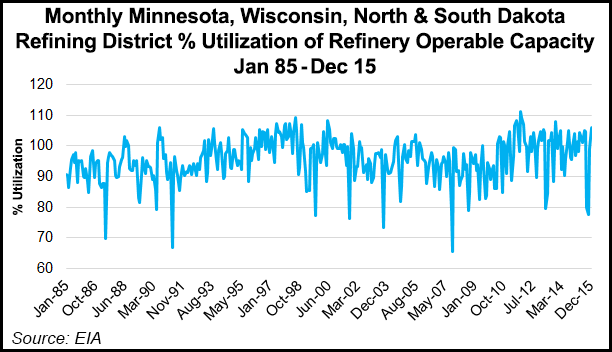 Irvine, CA-based Meridian’s proposed Davis Refinery is slated for a 620-acre site near Belfield, ND, near a highway, rail and pipeline transportation outlets. Backers acknowledge that longer term, the project will require infrastructure enhancements in the area.

Not known for its refining capacity, North Dakota opened a refinery last year, the first new one in the nation in decades. That refinery and an older one in Mandan, ND, operated by Tesoro, are the only two in the state. There are two other proposals in the works, besides the latest one from Meridian, according to the state’s Department of Mineral Resources (DMR).

Tesoro’s refinery in Mandan processes up to 68,000 b/d. The state’s original refineries were all opened in 1954, including a Standard Oil facility in Mandan and others in Williston and Dickinson, ND. The latter two were closed in the late 1980s amid sustained low commodity prices, a DMR spokesperson said. Besides Belfield, there are plans for refineries at Makoti and Devils Lake, according to DMR.

The Meridian refinery is currently in the design phase, with groundbreaking set for mid-2016, the spokesperson said. Plant completion is expected by 2018.

“Meridian will use state of the art equipment and processes to construct one of the first greenfield fuels refineries in the nation in four decades,” the spokesperson said. “The natural gas-operated plant is being designed to be highly efficient and will be capable of producing nearly zero sulfur diesel and jet fuels years ahead of federal Environmental Protection Agency [EPA] mandates.

“Operating on gas will provide many advantages, including low operating costs, low emissions and no need for EPA permitting.”

Meridian filed applications Wednesday for a county zoning certificate and conditional use permit. Officials indicated that in coming weeks the company will file additional permit applications, including one for a construction permit from the North Dakota Department of Health.

As part of the conditional use permit, Meridian is seeking permission to build an equipment assembly and fabrication facility, which could serve the needs of both the refinery and local oil/gas businesses.

“As a new plant, the [project] will not be burdened with outdated legacy operating units, will operate more cleanly and efficiently using state-of-the-art instrumentation and control technology, and will fully comply with modern environmental/safety requirements,” the spokesperson said.

Meridian officials are telling the local community that it is coming to North Dakota with a “commitment to the future and an eye to the big picture,” promising to address “critical infrastructure needs for housing, commercial businesses, industrial space and basic utilities.” Meridian intends to develop a gas-fired power plant to ensure sufficient electrical power for the refinery and the nearby community of Belfield.