The California Air Resources Board (CARB) extended the state’s low carbon fuel standard (LCFS) to 2030, increasing the carbon reduction goal from 10% to 20%. CARB said the amendments were needed to “make the program more versatile and comprehensive” for fighting climate change. 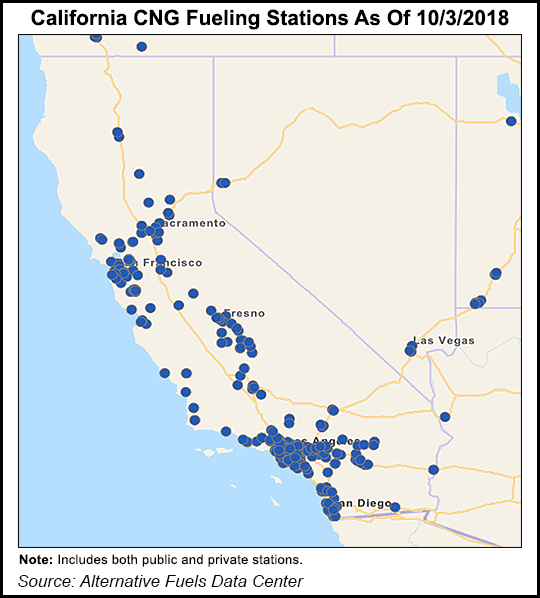 Calling the LCFS the cornerstone of California’s efforts to reduce greenhouse gas emissions, CARB officials said the state is spurring innovation in low-carbon transportation fuels, such as hydrogen, electricity and biodiesel, but did not mention renewable natural gas (RNG), or biomethane.

CARB Chair Mary Nichols said the latest move will “take California’s climate fight up another notch,” addressing credits for aviation fuels and for new zero emission vehicles (ZEV). The agency was responding to requests from both the state legislature and Gov. Jerry Brown, Nichols said.

In contrast, the Western States Petroleum Association (WSPA) questions that the credit mechanisms in place can sustain themselves over the next decade. “We think the LCFS program is at a critical pivot point,” said WSPA President Catherine Reheis-Boyd.

“The LCFS credit market behavior is strongly indicating that there is no path to sustainability into the next decade,” Reheis-Boyd told NGI on Friday. “Addressing cost containment is clearly the next step toward completing the full LCFS regulatory process.”

Currently, requirements call for a 10% reduction in “carbon intensity by 2020, and the extended rules call for 20% by 2030.” Carbon intensity refers to the amount of carbon emitted throughout a fuel’s life cycle from extraction or production to combustion.

Drawing a comparison to the Trump administration’s move to rollback low carbon fuel standards, Jeremy Martin, senior scientist at the Union of Concerned Scientists, said “CARB made the right move when it doubled down on its support of LCFS, extending and strengthening its program.” He predicted increased reductions in oil use and emissions.

“It is imperative that we take the carbon out of our transportation system, which is the source of more than 40% of the state’s climate pollution,” Martin said.

California’s new requirement aligns with the state’s overall 2030 target of reducing climate change-related emissions 40% below 1990 levels by 2030, under the 2016 law Senate Bill 32.

Various utility rebate programs for ZEVs will be restructured, and there will be more incentives for new car ZEV buyers. “Credits are generated by producers of cleaner fuels and can be sold to producers whose product will not meet the program’s declining benchmark for carbon intensity,” the CARB spokesperson said.

Earlier this year, SoCalGas assisted many fleet operators in obtaining some of the $1.1 million in alternative fuel state grants. State and local officials attended a ribbon cutting ceremony at the new fueling site to open the facilities.

Also in California, the EV and hydrogen fuel-cell truck sectors received a boost from CARB in the form of $205 million in grants for ZEVs, announcing 11 grants that were awarded at the end of last month (September). EV and hydrogen trucking backers view the move as a sign of new-found confidence by the state in their technologies.

All of the projects selected for grants are from what the state defines as “disadvantaged communities” as part of the state’s stepped up effort address air quality and climate change issues in these communities. “They’re the ones suffering the most from the negative impact of the freight trucking industry,” according to David Petit, senior clean air attorney with the Natural Resources Defense Council.