As they continue to pursue rules on hydraulic fracturing (fracking), California oil/gas officials are not seeing the increase in exploratory activity or permitting as other shale basins around the nation have experienced. Drilling activity is down slightly compared to this time last year, a spokesperson for the state Division of Oil, Gas and Geothermal Resources (DOGGR) told NGI’s Shale Daily Wednesday. 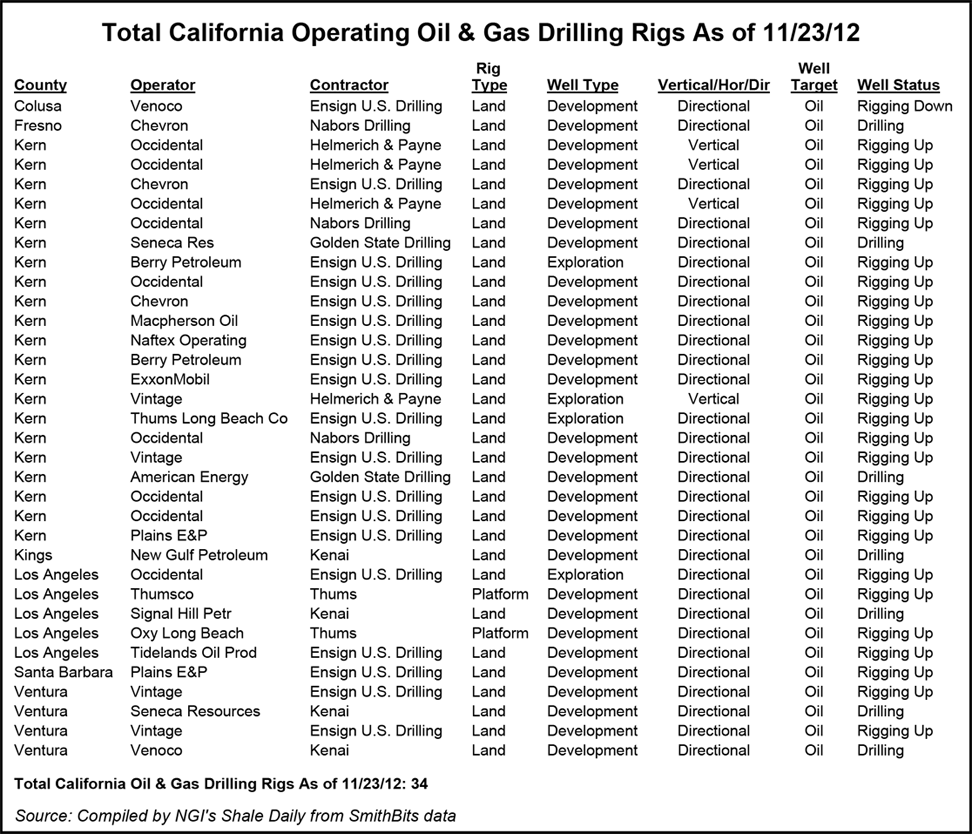 Meanwhile, DOGGR staff have been informally collecting stakeholder input as they draft the proposed fracking rules. A draft proposal is expected to be made public before Christmas, the DOGGR spokesperson said. Three public hearings on the draft are being scheduled in January.

“There has been no unusual or increased activity in the Tejon North or Tejon fields, according to our Bakersfield office,” the Sacramento-based DOGGR spokesperson said. “Overall, District 4 [Kern County] drilling activity is down slightly as compared to this time last year.

Rock Zierman, CEO of the California Independent Petroleum Association (CIPA) could not confirm or deny the level of drilling/permitting activity. CIPA has not polled its membership on drilling or permit activity for a number of months, Zierman told NGI’s Shale Daily.

“The major thing happening in the state [DOGGR] in the next couple of weeks are the draft fracking regulations,” Zierman said. “The division is basically going to do what the state legislature failed to do, which is define it and require disclosure among other items” (see Shale Daily, Aug. 20).

“When the new legislature is back is session in January, I think we will have draft regulations on the street, so the legislature will know at least where the [Gov. Jerry Brown] administration is going.”

Similarly, the other major oil/gas industry organization, the Western States Petroleum Association’s (WSPA) spokesperson said he is not aware of the level of drilling/permit activity right now, and WSPA has been busy providing its input to DOGGR on the draft fracking regulations.

Unlike some of the legislative proposals that required a large amount of pre-notification to various interest groups, such as landowners, Zierman doesn’t think the DOGGR staff draft rules will include a lot of that. “The division participated in a lot of the discussions on the bills, and they were only concerned with making sure the state was pre-notified as the regulators involved.”

The DOGGR spokesperson said there will be disclosure requirements, but how detailed and pervasive those will be is anyone’s guess. He also cautioned that the draft rules initially released will change considerably through the public hearing process.

Under a farm-in agreement and area of mutual interest with Lani, East West said the partners would develop 3,200 net (4,500 gross) acres in a leasehold between the Tejon North and Tejon fields. The formations together have produced more than 100 million boe, according to East West.

Canada-based East West, which was formed two years ago, said it would contribute $2.5 million to Lani’s exploration program over the next four to six months to gain a 25% stake in the Tejon Extension and a 21.25% participation interest in Tejon Main. Two exploratory wells are planned. The partners also want to acquire at least another 7,000 gross acres, East West said.

Regarding wider activity in the Monterey Shale, which underlies parts of three or four DOGGR districts, the state spokesperson said it was not easy to determine how much activity the Monterey is attracting. “Permits are slightly up in Los Angeles and Ventura [which don’t include the Monterey] and slightly down elsewhere this year compared to last.

“There is no real evidence of a boom. For all the potential the Monterey Shale may have, no one appears to have had a ‘eureka’ moment there. Venoco is probably the biggest player in the Monterey at this point.”

There were 34 rigs operating in California last week, most of them directional and all of them targeting oil, according to Smith Bits data.