California regulators are working on a long-term strategy to manage the transition from natural-gas fueled technologies to meet the state’s long-term decarbonization goals. 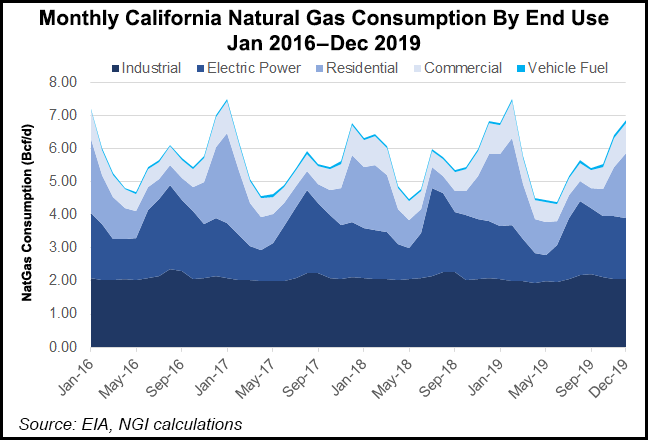 California Public Utilities Commission (CPUC) member Liane Randolph, who summarized the issues in an internal newsletter, said the transition is expected to take up to 30 years and be managed by the five-member commission and other agencies, including the California Energy Commission.

Because of California’s historic dependence on natural gas, particularly for electric generation, Randolph said regulators want to take an “holistic approach,” which includes assuring the gas system is safe and reliable.

The new rulemaking proceeding is to have three tracks. One deals with reliability standards for gas transmission pipelines, while a second would establish buffers against transmission pipeline operational issues causing negative impacts on wholesale and local gas markets. The third track would create “regulatory solutions” and the planning strategy.

Three major gas-related safety breaches in the state over the past decade led by the San Bruno pipeline explosion, Aliso Canyon underground storage leak and two other major transmission pipeline leaks, have led many elected and regulatory officials to call for reducing reliance on gas.

Randolph said the CPUC proceeding is planning for “significant changes” in the gas distribution systems, noting it has been 16 years since regulators developed a long-term gas system planning process. “Much has changed in California’s gas industry since 2004,” she said.

Pacific Gas and Electric Co. officials said they “welcome the opportunity to avoid investments in new gas assets that might later prove underutilized as local governments and the state work together to realize long-term decarbonization objectives.”

“This assessment is shared by a growing number of industry experts and utility companies, including the Los Angeles Department of Water and Power,” Detz said. “It is also encouraging to know that preserving reliable and affordable energy for all Californians will be a part of this new proceeding.”

In addition, the utilities reiterated their support for the climate change mitigation goals that should move the state toward more renewable natural gas and hydrogen use.

“Gas has helped the U.S. become a global leader in reducing carbon emissions and provides clean, reliable, and affordable energy,” he said. “Restricting consumer choice and affordability through this ban will make us more dependent on expensive and unreliable energy sources.”