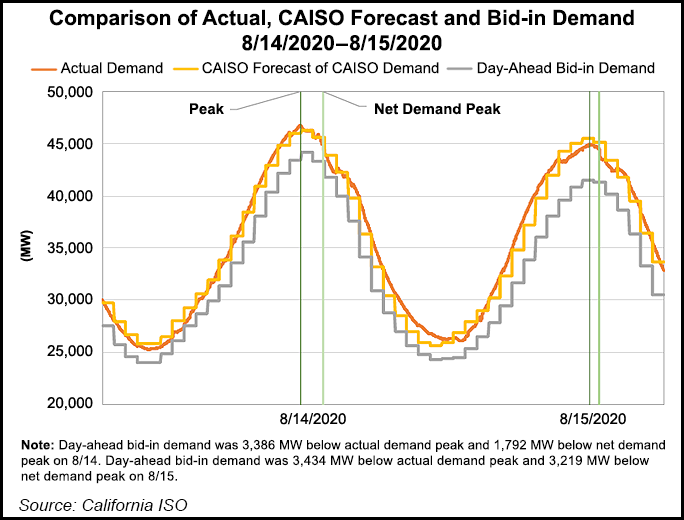 The California Independent System Operator (CAISO), California Energy Commission and the California Public Utilities Commission on Tuesday issued a preliminary root cause analysis of the Aug. 14-15 outages. Gov. Gavin Newsom has requested “immediate action” to minimize use of the blackouts.

Among the causes cited was that natural gas resources bid in 300 MW less than the state’s fleet of gas-fired generator resource adequacy (RA) requirements. There was a 1,000 MW difference between the RA needs and the bids for resources, “largely attributed to forced outages and derating due to extreme heat.”

CAISO ordered restricted maintenance at the power plants for Aug. 14-17, and there were 400 MW of planned outages. In addition, there were forced outages, including at the 494 MW Blythe Energy Center near the California-Arizona border. When it went out, it was generating 475 MW.

At another gas-fired plant on the second day of the outages, a 394 MW facility ramped down to 146 MW, causing a loss of about 248 MW. It was not an outage, but there was “an erroneous dispatch from the scheduling coordinator to the plant.”

Gas-fired plants collectively experienced 1,400-2,000 MW of forced outages through derating or ramping down of plants, according to the report, which said outages mostly were from extreme heat or day-of breakdowns. The 400 MW of planned outages also were not accounted for with substitute supplies.

Overall, the missteps were because of “a series of factors related to planning processes, weather conditions, and market constructs,” such as the day-ahead energy market, said the report. A final analysis is expected to be completed by the end of the year.