A consortium of energy companies has finalized an agreement to supply certified natural gas produced in Canada. 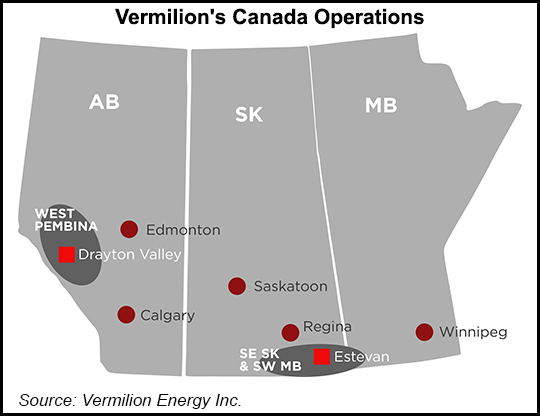 Financial details were not disclosed for the agreement, which is said to be the first of its kind for Rockpoint and Uniper.

The “rigorous certification” process secured via the EO100 Standard for Responsible Energy Development, “supports our goal to deliver responsibly produced natural gas to the market,” Vermilion President Curtis Hicks said, “Our partnership with Uniper and Rockpoint further demonstrates our commitment to delivering solutions that support the energy transition.”

Obtaining a differentiated gas label, which also is referred to as responsibly sourced gas or RSG, followed a third-party audit.

Criteria assessed via the EO100 Standard is centered around environmental, social and governance (ESG) factors. A company’s corporate governance, transparency and ethics undergo a review, along with its progress on human rights, social impact and community development. Also assessed under the EO100 Standard are Indigenous People’s rights, fair labor and working conditions, as well as climate change, biodiversity and environment issues.

EO100 certificates are uploaded into the Xpansiv DF Registry, which provides production accounting and traceability to ensure integrity and auditability.

Uniper would offtake Vermilion’s gas and manage delivery to Access, which is a wholesale supplier that provides natural gas and related services to commercial, industrial and institutional customers in Canada.

“Demand for transparency in energy production practices, and being aligned with ESG initiatives,  is on the rise,” said Uniper’s Rob Van Horne, head of North American Gas Origination. “We believe natural gas transactions validated by credible certification standards are the wave of the future.”

Vermilion and Rockpoint, he said, are “forward-thinking organizations.”

Uniper has set a carbon-neutral goal by 2035 for its power generation business in Europe. It has nearly 35 GW of installed generation capacity, with core projects in Europe and Russia. It also has projects underway for liquefied natural gas (LNG), including the proposed Goldboro export project on Canada’s east coast.

In addition, a Uniper affiliate in September said it had successfully completed tests to move LNG by rail in specialized tank cars.

Rockpoint’s Sheri Doell, vice president of Origination and Renewable Energy, said the company was “committed to the energy transition.” Through Access Gas, she said, “Rockpoint is able to connect our customers to responsible gas producers who are committed to ESG leadership.”

Rockpoint, owned by Alberta-based Brookfield Infrastructure Partners LP, began commercial operations more than 20 years ago. It has grown to become one of the largest independent owners and operators of gas storage in North America.

Rockpoint has eight assets with 300 Bcf-plus of working gas capacity in key producing and consuming regions.

In Alberta, Rockpoint owns and operates the Aeco Hub, comprising the Suffield and Countess facilities (154 Bcf) and the Warwick facility (21 Bcf). In California,  Rockpoint is owner and operator of Wild Goose (75 Bcf) and Lodi, which includes the Lodi and Kirby Hills facilities (31 Bcf). Rockpoint’s Oklahoma assets include Salt Plains (13 Bcf), and in Texas, it owns a 49% stake in the Tres Palacios facility.