Two of Appalachia’s leading operators said Friday that they would curtail some production this shoulder season, but both are anticipating a long-awaited increase in natural gas prices later in the year. 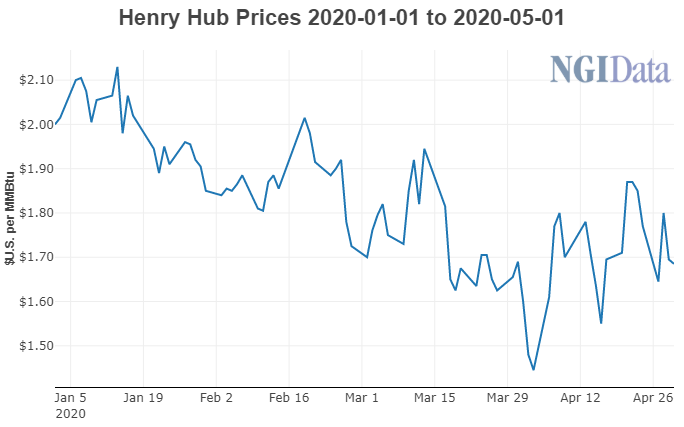 Cabot Oil & Gas Corp., which operates in just one northeastern Pennsylvania county, said there will be “modest-price related curtailments” this summer as the market remains oversupplied amid weak demand during the Covid-19 pandemic. Southwestern Energy Co., which has been more focused on wet gas production in West Virginia in recent years, also indicated that it would shut-in some condensate production.

“The outlook for natural gas prices later this year and into 2021 has drastically improved since our year-end call in February,” said Cabot CEO Dan Dinges, noting that Henry Hub futures prices for 2021 have increased by roughly 50 cents to $2.75/MMBtu since then.

“This has been driven by significant gas production declines in 2020 and 2021 from the substantial reduction in activity levels we have seen in legacy gas producing basins like the Marcellus, Haynesville and Utica, in addition to sizable cuts in activity we are seeing in oil basins like the Permian, Eagle Ford and Midcontinent, which are expected to result in significant declines in associated gas production.”

Given the silver lining, operators in gas basins like Southwestern and Cabot, could ultimately increase activity to take advantage of the price swing. Southwestern said it’s switching its focus to dry gas production.

For now, the company said it would spend at the low end of its previously announced guidance, with capital investment for the year expected to be $860 million. Meanwhile, Cabot reiterated its $575 million capital program and management said it was too early to offer guidance for 2021 spending.

Cabot produced 2.36 Bcfe/d in the first quarter, up 4% from the year-ago period, but down from about 2.5 Bcfe/d in 4Q2019. The company guided for the sequential production decline as it works to bring on larger pads with longer laterals to maximize efficiency. That’s led to a lighter turn-in-line schedule in recent months. The company also said production curtailments are likely to lower second quarter production slightly.

Southwestern produced 201 Bcfe in the first quarter, up from 182 Bcfe in the year-ago period, but down slightly from the 208 Bcfe it produced in the fourth quarter as operators have scaled back activity in the face of lower prices. The bulk of the company’s production came from the Northeast Appalachia division, where it produced 114 Bcf. In Southwest Appalachia, the company produced 87 Bcfe.