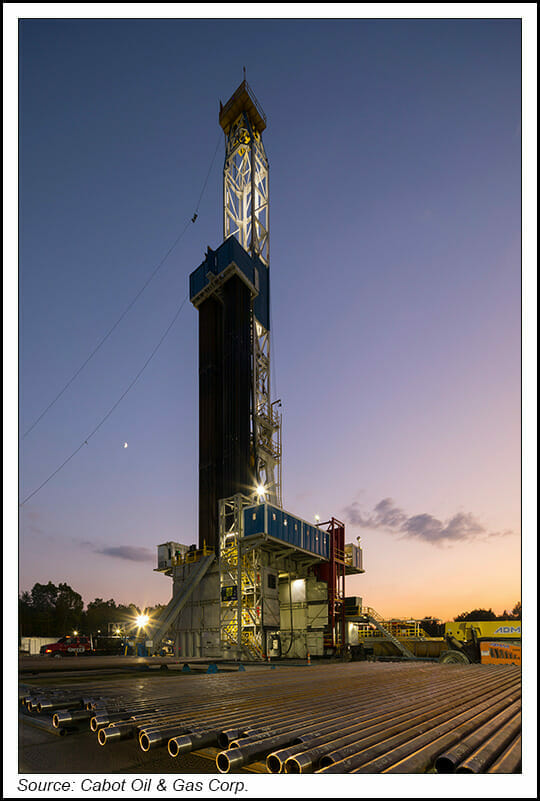 Both companies reported an increase in average realized prices during the quarter, but that didn’t prompt them to change course as Appalachian operators have scaled back in recent years amid volatile commodity prices and calls for better returns from investors.

Cabot produced 2.29 Bcfe/d during the quarter, all of it natural gas produced solely in Susquehanna County, PA. That was down slightly from 2.36 Bcfe/d in 1Q2020. But the company had guided for a drop during the period given a decrease in operating activity and capital spending during the second half of 2020.

“Our production guidance for the second quarter implies a slight sequential decline relative to the first quarter, which is a result of lower activity levels and capital spending during the winter season,” Dinges said. “Activity levels are expected to increase in the second and third quarters, resulting in sequential growth during the second half of the year, primarily during the fourth quarter in anticipation of higher natural gas prices and the in-service of the Leidy South expansion project.”

Dinges said the company expects some “near-term pressure on local basis differentials during shoulder months and as pipeline maintenance programs kick in.” But Cabot expects natural gas prices to continue firming this year. Winter demand drove strong gains in the company’s average realized natural gas price, which was $2.31/Mcf during the first quarter, up 34% from the same time last year.

The steady quarter helped Cabot generate $137.6 million of FCF, a more than 175% increase from the year-ago period. The company has generated FCF in 17 of the last 20 quarters.

Southwestern has similar plans for 2021, announcing guidance late last year to keep 4Q2021 production flat with 4Q2020 levels, including the assets it took in the acquisition of Appalachian pure-play Montage Resources Corp. that was completed last November.

The company had a stronger start to the year, though, reporting 269 Bcfe of production, which consisted of 79% natural gas, 17% natural gas liquids and 4% oil. That’s up from 201 Bcfe in the year-ago period. The company’s Southwest Appalachia division accounted for 151 Bcfe of 1Q2021 volumes, while its Northeast Appalachia division, where volumes are drier, produced 118 Bcf.

“The Company’s returns-driven strategy is underpinned by a lower cost structure, improving operational performance, a strong balance sheet, the generation of free cash flow and capturing the benefits of scale, all while operating safely and responsibly,” said CEO Bill Way.”

Southwestern in the first quarter drilled its first Utica Shale well in Ohio after entering the state with the Montage acquisition. COO Clay Carrell said the well is currently being completed and is expected to come online this quarter. The company has 12-15 Utica wells planned for this year, Carrell said, adding that “we get the incremental benefit from that program of now consistently drilling Utica wells and all the learning that’s going to come from that.”

Southwestern generated $88 million in FCF, delivering on a plan to prioritize the metric this year, and beating 4Q2020 FCF of $55 million. Way attributed first quarter FCF to the company’s increased scale from the Montage acquisition and improving performance across the company.

The cash gain came despite losses associated with settled NGL and oil hedges of $22 million after prices for the commodities increased. Like other operators, however, Southwestern’s average realized prices increased to $2.62/Mcfe in the first quarter, up from $1.69 in the year-ago period.

Southwestern reported first quarter net income of $80 million (12 cents), compared to a net loss of $1.5 billion in the year-ago period that was primarily related to a steep impairment on its oil and gas properties.