Citing continued downward pressure on natural gas prices, Houston-based Cabot Oil & Gas Corp. on Wednesday reported a 40% increase in production but decreased earnings in the second quarter from a year ago. Both natural gas and liquids production continued to soar, up 37% and 96%, respectively, CEO Dan Dinges said during a conference call with financial analysts.

Net income was $35.9 million (17 cents/share), for 2Q2012, compared with $54.7 million (26 cents) for the same period last year. “The compression of earnings was driven by a 19% decrease in per-unit revenues as a result of continued downward pressure on natural gas prices,” Dinges said.

Touting plans to operate nine rigs in four shale plays (Marcellus, Pearsall, Marmaton and Eagle Ford) by year-end and the prospect for adding 25,000 acres each in two still-undisclosed areas, Dinges projected overall production growth in the range of 35-50% this year and in a similar range in 2013. But profits could continue to be soft as evidenced in 2Q2012 when gas price realizations were $3.39/Mcf, down 27% for the same period in 2011, while realized oil prices were more than $102/bbl, up 8% from the same quarter last year.

“Our lease acquisition efforts have doubled from $45 million to $90 million in existing areas, filling in some holes and new plays,” Dinges said. “In a couple of new areas we have accumulated more than 25,000 acres in each area. All of these activities will have limited impact on 2012 production, but they certainly will enhance production expectations for 2013.”

Cabot is looking at capital expenditures next year of nearly $1 billion, said Dinges.

In ongoing operations, Dinges emphasized a new two-well pad in the Marcellus that had been operating for only 39 days in the second quarter but already produced 2 Bcf, or about 59-60 MMcf/d, along with a recently announced joint venture (JV) in the Pearsall Shale in Texas with Osaka Gas Co. (see Shale Daily, June 25).

On pricing, there will continue to be discounting for Cabot in the Marcellus in the 3-5 cents/Mcf range, Dinges said. For macro-pricing, he said there are “signs of encouragement. We’re encouraged and enthusiastic that the commodities market has recently turned and improved with some strong fundamentals behind some increased demand, and the storage numbers are certainly headed in the right direction,” he said.

JV operations in a portion of northwestern Pennsylvania’s Utica Shale with Range Resources Corp. have been impacted by drought conditions, Dinges said. For now, the Cabot-Range JV appears to have sufficient water to complete close to all of the hydraulic fracturing scheduled.

“Sixty percent of the work has been completed, and we expect to do at least two-thirds of remaining work this year,” Dinges said. “Cabot also is adding additional [water] storage capacity at its existing withdrawal sites, and we don’t expect to have any problems with fracking.” 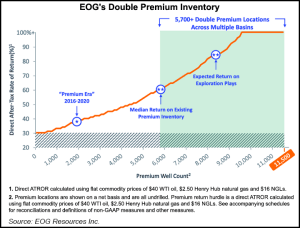 Market fundamentals, not commodity prices, will determine whether EOG Resources Inc. decides to increase oil production over the coming months, executives said during the recent first quarter conference call. The Houston-based independent plans to maintain production at around 440,000 b/d until demand has recovered to above pre-Covid levels and U.S. crude inventories are below the…