Inclement weather along parts of the Gulf Coast has so far done more in recent weeks than the coronavirus to impact operations at U.S. liquefied natural gas (LNG) export terminals, but operators are keeping a close eye on developments at home and abroad as the disease spreads. 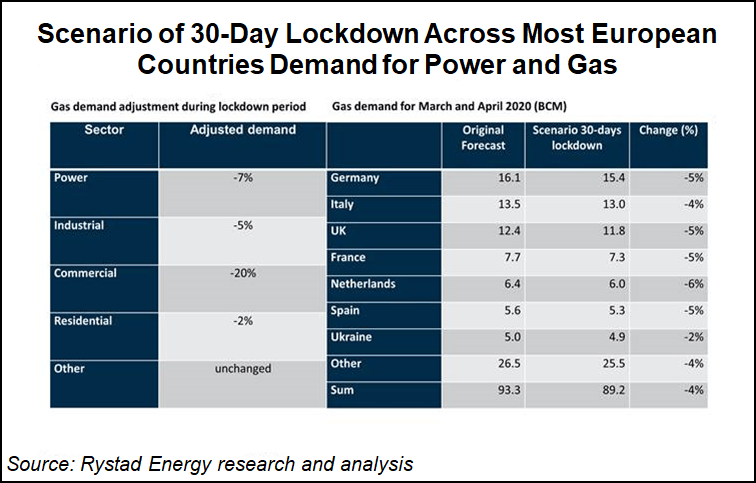 Representatives of the Cameron, Corpus Christi, Cove Point, Elba Island, Freeport, and Sabine Pass terminals told NGI that operations have not been impacted by efforts underway across the country to halt the spread of the virus. The facilities are the only export terminals currently in operation in the United States.

For the most part, U.S. liquefaction facilities are following the playbook that’s shaped up across the economy since last week, with the primary nuisance so far appearing to be shuffling large staffs. As companies have across the country, terminals are requiring those who can to work from home, restricting nonessential travel and following local and federal guidelines.

At Elba Island in Georgia, Kinder Morgan Inc. spokesperson Katherine Hill said where people are needed in the field, the company is implementing split shifts and alternate locations “to create social distancing and limited exposure to one another.” At Cheniere Energy Inc., the nation’s No. 1 LNG exporter, spokesperson Jenna Palfrey said such measures aren’t expected to impact production, while the company has plans in place, like its peers, if the pandemic gets worse.

Feed gas deliveries to U.S. facilities have so far remained steady this week at roughly 7-8 Bcf/d, according to NGI’sU.S. LNG Export Tracker. Fog has impacted loading since last week, particularly at Cheniere’s Sabine Pass facility in Louisiana, where the cover has shut down the Sabine-Neches ship channel periodically and tested storage capacity at the terminal. Similar weather is expected for the area through March 25.

Vessels have still been coming and going regularly along the Gulf Coast, with 13 arriving over the last seven days, according to ClipperData, which said six vessels were floating offshore on Thursday waiting to lift cargoes.

The situation is more dire overseas, where the coronavirus has spread rapidly from its epicenter in China, with Europe hit hard. With cases rising and measures in place across various countries to limit the threat, energy consumption has been curtailed. Rystad Energy said Thursday European gas demand in 2020 is likely to drop by 0.7% compared to a pre-coronavirus forecast. Year/year growth will be limited to about 2 billion cubic meters, or roughly 71 Bcf, compared with previous expectations for a 6 Bcm (212 Bcf) increase.

European gas prices, which had taken a beating this week, were up in early trading Thursday as a cold front is set to arrive next week. It’s also become clearer that the continent might import less LNG in the weeks ahead due to the outbreak.

ClipperData told NGI Thursday that its ship tracking showed that three LNG cargoes had been diverted from Europe. One of those vessels is heading for South America, while the other two are heading in opposite directions near the continent, an indication that floating storage could soon increase offshore, according to Kaleem Asghar, who directs LNG Analysis.

There were 13 vessels floating worldwide on Thursday, according to ClipperData. Various estimates showed a peak of 20 or more floating vessels in mid-February as the outbreak was intensifying in China.

U.S. shipments are likely to be insulated by long-term agreements that obligate buyers to lift cargoes. If vessels continue to be diverted, they’re likely to find their way toward Asia. U.S. contracts also don’t include clauses restricting destinations, so spot cargoes from the country can find a home elsewhere.

“There are now signs of a trend reversal on global LNG markets, with volumes shifting from Europe towards Asia and especially China, said Schneider Electric analyst Balint Balazs in a research note on Thursday. “We have seen the opposite dynamic in the past couple of months, as extensive lockdowns have dented Asian gas demand, allowing for increased shipments to Europe.”

He said “European markets have now come under the effects of lockdowns and the resulting decline in energy use, whereas Chinese consumption has rebounded faster than expected as economic activity starts to pick up.”

European import terminals are also taking more precautions to protect employees. Three facilities in Italy are recommending that personnel wear protective gear when boarding inbound LNG vessels, according to Tellurian Inc., which is developing the Driftwood LNG terminal in Louisiana. Tellurian also said inbound vessels in the region are being required to assure ports that their crews are free of contagious diseases before entering.

Back in the United States, others in the LNG value chain are taking steps to ease burdens created by the outbreak. Upstart Redwood Markets Inc., which in 2018 launched an online platform geared toward the Gulf Coast to trade physical LNG cargoes, said it would make its services free until July 31 to better manage distressed trading requirements.

“The markets for trade of physical LNG cargoes are deeply personal, relationship-driven markets that have required close contact between buyers and sellers while engaging in transactions and managing risks,” said Redwood CEO Ajay Batra. The current situation that we all find ourselves in makes that increasingly difficult.”

Analysts also continued to warn Thursday that one of the greatest impacts of the virus on U.S. exports could come for second wave facilities that have yet to be built if demand continues to deteriorate.

“Low spot prices and limited long-term LNG demand growth have hindered further LNG development in the U.S., and has likely turned the potential second wave of projects in the mid-2020s into a mere trickle,” analysts said in a BofA Global Research Report.