Located above the Marcellus Shale in the Appalachian Basin, the Burket-Geneseo Shale “could be the next super giant field,” but the play is still well in its infancy and the current Marcellus development could jeopardize the ability of operators going back in down the road to pull those additional reserves, according to Gregory Wrightstone of Wrightstone Energy Consulting. 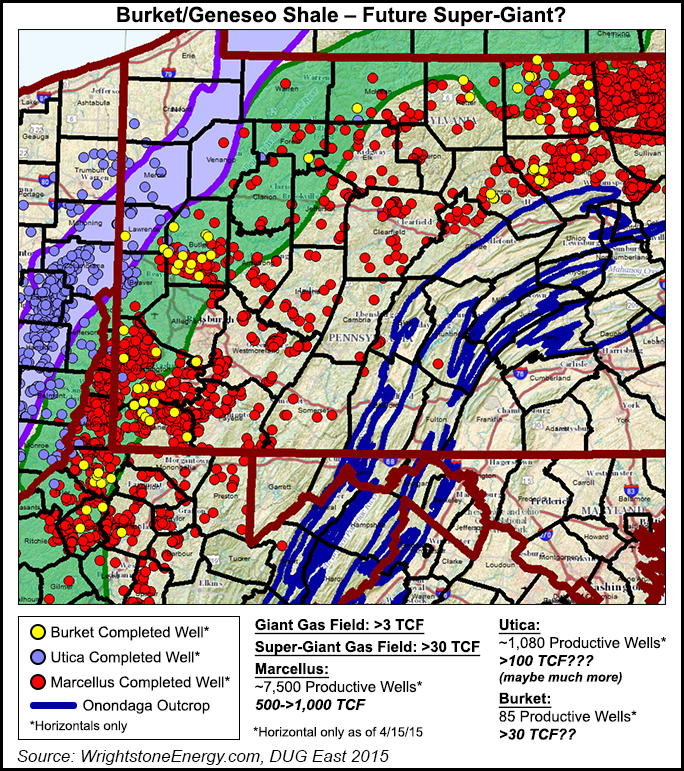 Speaking before a crowd at DUG East in Pittsburgh, PA, on Thursday, Wrightstone said the Burket-Geneseo, which could be classified as a super giant field — 30 Tcf or greater — is often overlooked and overshadowed by the Marcellus.

The Burket refers to most of Pennsylvania and the West Virginia portions, while the Geneseo is considered to cover northeast Pennsylvania and southern New York. It lies just above the Marcellus, from less than 100 feet of separation in West Virginia to more than 800 feet in northeastern Pennsylvania. It is the black organic rich shale that lies immediately on top of the Tully Limestone, and is an Upper Devonian formation.

Stats on the play are a bit hard to come by as there are less than 30 wells on record with public production data.

“In 2014 we saw an explosion of permitting activity for the Burket-Geneseo, but it should be interesting to see what happens in 2015 with the downturn,” Wrightstone said. “We might look back to 2014 or 2015 and say one of these marked the breakout year for the Burket, much as 2008 was the breakout year for the Marcellus. Today, there are about 85 producing Burket-Geneseo wells…and about another 100 wells that are drilled or drilling. There are 19 operators that have completed wells as productive in the Burket,” and the leading operator is EQT Corp., which is planning 40 additional wells in 2015.

Wrightstone said the play shares many of the traits of its big brother, but that there are some concerns surrounding low pressure potential and the economic viability with current fundamentals.

According to Wrightstone, the average six-month cumulative production of a northeastern PA Burket-Geneseo well is 530 MMcfe, which is nearly half the 1,023 MMcfe that is seen from a northeastern Pennsylvania Marcellus well.

“Half a Bcf is pretty good… but probably not economic [currently]. If we are a company drilling in the area, you’re really not driven to exploit this reservoir at about the same cost, for half the reserves. It looks like companies are voting with their feet in this area. Since 2010 there have only been two permitted Burket-Geneseo horizontal wells in this whole area.”

The economics are a little better in southwestern Pennsylvania, where the six-month cumulative production value of a Burket-Geneseo well is 656 MMcfe, compared to 1,021 MMcfe for a similarly located Marcellus well.

He explained that a number of wells in Washington County were drilled in a stack pattern with 1,000 feet. spacing for the laterals for the Marcellus and about 500 feet above it for the Burket-Geneseo. “A key well is Consol’s NV39F well. Consol reported that the initial production rate indicated that well would perform at 5.8 Bcfe,” he said. “That well actually came in at 9 Bcfe…which is a stellar well. They also reported that the two Marcellus wells underneath it were greatly impacted, and those wells had initial production rates of 9 and 10 MMcf/d. So this is more evidence that perhaps we are having some interaction, perhaps maybe in a positive effect for the underlying Marcellus.”

However, Wrightstone warned there could be ramifications down the road. “If a company elects today not to develop its Burket-Geneseo reserves in this area and goes ahead and completes their Marcellus well, what is going to happen eight to 10 years later when they want to complete the Burket, and we have this possibility of interaction? You’ll probably have a low-pressure sink under the Burket, and a possible negative interaction with the frack being drawn down into the Marcellus. So you may be sacrificing those reserves in the Burket-Geneseo if you elect to do it later.”