Natural gas futures continued lower following the release of government storage figures that were somewhat on the high side of what the market was expecting. 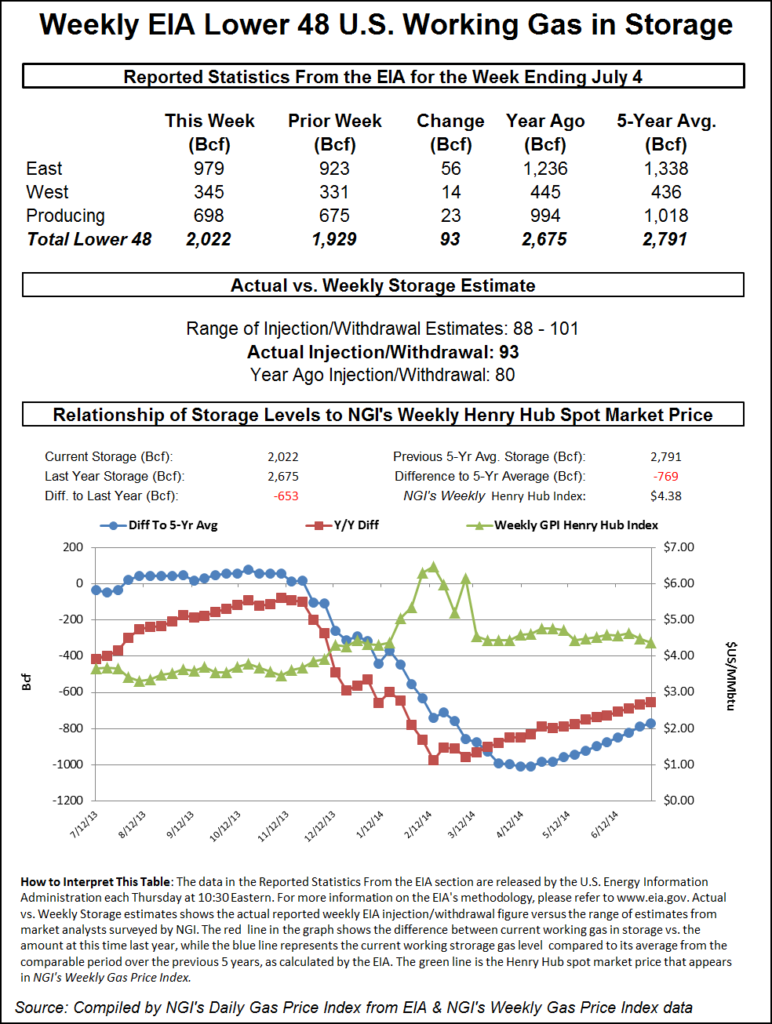 For the week ended July 4 the Energy Information Administration (EIA) reported an increase of 93 Bcf in its 10:30 a.m. EDT release. The injection report of 93 Bcf was about 3 Bcf higher than market surveys and independent analyst projections.

Prior to the release of the data, analysts were looking for a build of right around 90 Bcf. A Reuters survey of 22 traders and analysts revealed an average increase of 92 Bcf with a range of 88-101 Bcf. IAF Advisors was looking for a build of 90 Bcf, and industry consultant Stephen Smith Energy Associates anticipated an injection of 90 Bcf as well.

“It seems as though the market has broken down considerably and the market has fallen well below the $4.25 support area,” said a New York floor trader. “We could see $3.75, and this market has no rallying power.”

Others see continued downward pressure on prices as well. “The 93 Bcf net injection was slightly more than expected and more than the 72 Bcf five-year average. It was the 12th consecutive weekly injection larger than the five-year average. The build may not do too much more than reinforce the established bearish trend, but it does maintain downward pressure on prices,” said Tim Evans of Citi Futures Perspective.

Inventories now stand at 2,022 Bcf and are 653 Bcf less than last year and 769 Bcf below the five-year average. In the East Region 56 Bcf was injected, and the West Region saw inventories up by 14 Bcf. Inventories in the Producing Region rose by 23 Bcf.

The Producing region salt cavern storage figure increased by 6 Bcf from the previous week to 194 Bcf, while the non-salt cavern figure rose by 19 Bcf to 505 Bcf.