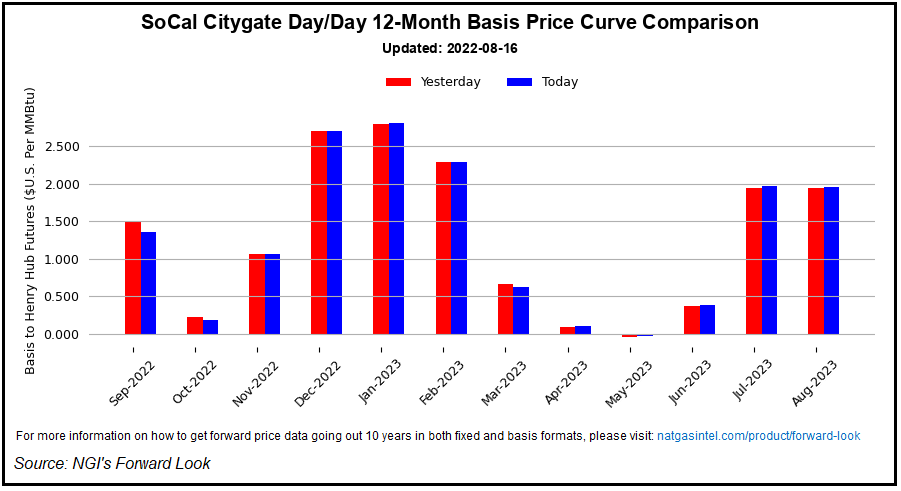 With weather set to moderate from the record heat seen across much of the country in June and July, bulls wasted no time in pouncing on the latest production data that showed a roughly 1.8 Bcf day/day decline. Some technical momentum carried the September Nymex contract up more than 50 cents as Tuesday’s session got underway, with bulls maintaining control throughout the day.

Wood Mackenzie said the production declines were concentrated in areas where there are maintenance or operational issues underway, though revisions are expected in Wednesday’s sample data.

Overall Northeast production was down around 840 MMcf/d, according to the consultancy. About 310 MMcf/d of lost output was seen in Southwest Pennsylvania (SWPA), while around 165 MMcf/d was in Northeast Pennsylvania (NEPA). West Virginia recorded a roughly 175 MMcf/d drop, and Ohio saw about a decline of about 190 MMcf/d.

In SEPA, production was down along most pipes in the area, but the most significant drops were along Columbia Gas Transmission (TCO) and Texas Eastern Transmission, according to Wood Mackenzie. However, there were no posted maintenance events along those systems, the firm said.

NEPA production was down along Tennessee Gas Pipeline, where the force majeure along the 300 Line remains in place restricting operational capacity, according to Wood Mackenzie. Flows were lower on several pipelines in Ohio.

Production also dropped about 285 MMcf/d in the Rockies, while Texas output was down about 235 MMcf/d with two maintenance events on Natural Gas Pipeline Co. of America. Both are set to end next week.

Mobius Risk Group said bulls also benefited from storage data that continues to portend soft injections in the near term.

Transcontinental Gas Pipe Line Co.’s (Transco) storage system increased by a modest 0.32 Bcf based on Monday’s data. This is 0.5 Bcf less than the prior week, according to Mobius. Southern Star did not report, but typically follows a similar week/week path as Transco, Mobius said. The Eastern Gas system posted an inventory gain of 4 Bcf, or half of the prior week’s reported build. TCO storage, also in the Northeast, did not report last week’s inventory change, but Monday’s report of 156 Bcf in underground storage implies a build of 5 Bcf or less.

The lowest total build for these four facilities so far this summer is 10.21 Bcf, recorded for the week ending July 21. That week, the total inventory change as reported by the Energy Information Administration (EIA) was 15 Bcf.

“Considering a sample of daily facilities reported a marginally higher build than the July 21 week, it is logical to believe the market will be expecting the Thursday inventory report from the EIA to be at or below 20 Bcf,” Curry said. “This would compare to the same week last year at 38 Bcf, and the year-over-year change in weather was a modest 6 degree days. This is the tailwind for the market countering the current week where temperatures are significantly cooler than both the prior week and the same week last year.”

That said, near-term prices may be challenged to hold up, according to Mobius. The Southeastern United States is set to become increasingly mild as the balance of the month progresses. And while there are some major discrepancies in the weather models, there is a growing consensus that moderating temperatures are set to expand across much of the country in the coming weeks.

Already, temperatures have become much more comfortable across the Midwest, Mississippi Valley and Northeast, according to NatGasWeather. The forecaster said a series of weather systems was forecast to sweep through these regions, capping temperatures in the 70s and 80s, locally 60s. Additional weather systems are likely to follow this weekend and again next week, only this time advancing deeper into Texas and the South.

“While the West will remain impressively hot going forward, extreme widespread heat isn’t likely over the eastern half of the U.S. into early September as weather systems continue to track through. This also means time is running out on widespread extreme heat besides over the West,” NatGasWeather said.

With gas prices rocketing higher in the face of cooler weather, recent trading could be because of seasonal buying by large players pricing in risks of a colder-than-normal winter, according to the firm. A starting point of 3.4 Tcf in storage is “a little precarious” in that scenario, assuming Freeport’s liquefied natural gas terminal comes back online and pulls 2 Bcf/d again starting in October, it said.

“We also feel there will be a lot of stops triggered if this market gets to new highs and reaches $10.00, which would only act to send prices even higher,” NatGasWeather added. “The market will remain volatile, with the risk of sudden pullbacks even in what feels like a bullish overall backdrop.”

Despite forecasts showing a return of seasonal temperatures in some regions, solid heat was expected to continue for the western half of the country and led to huge price gains on Tuesday.

The National Weather Service (NWS) said upper-level ridging over the Southern Plains into the Central Gulf Coast would help drive temperatures into the mid to upper 90s to near 100 degrees over parts of the Southern Plains/Lower Mississippi Valley. Heat was set to build into California and the Northwest as well, allowing temperatures to rise into the well into the 100s through at least midweek, NWS forecasters said.

Power demand throughout California has been robust this summer because of periods of extreme heat combined with an ongoing drought.

Wood Mackenzie said a nearly 0.8 Bcf day/day increase in demand across California on Tuesday disproportionately tightened Northern California storage inventories, diverting nearly .65 Bcf of injections onto Pacific Gas & Electric Co. (PG&E) storage. While the sharp jump in demand on PG&E (roughly 399 MMcf) was almost equal to the jump in demand on the Southern California Gas (SoCalGas) system (around 398 MMcf), net withdrawals on SoCalGas were only 103 MMcf.

“On both pipes, these increases in demand were mainly driven by a surge in power demand,” Wood Mackenzie analyst Quinn Schulz said. “This will likely continue in the short-term” as cooling degree days (CDD) are forecast to peak Tuesday in California and could be up to 4.2 CDDs above normal.

As of Aug. 14, total PG&E inventory stood about 36.6 Bcf lower than the past five-year average, according to Schulz. This ties 2021 for the lowest total inventory since 2017.

Schulz said recent maintenance on the Redwood Path is to blame for the further strain being put on total inventory. Since Aug. 6, capacity through the Redwood Path has been limited to 1.7 Bcf/d, cutting flows by 322 MMcf/d.

“Conversely, PG&E has been withdrawing about 1.22 Bcf/d on average since then and withdrew just over 1.46 Bcf on Monday,” she said.