For August bidweek and the two previous weeks bears had the bulls on the ropes, but for the week ended Aug. 8, the bulls were able to turn the tables in stunning fashion. With the exception of a few points in California and the desert Southwest, all locations posted gains. 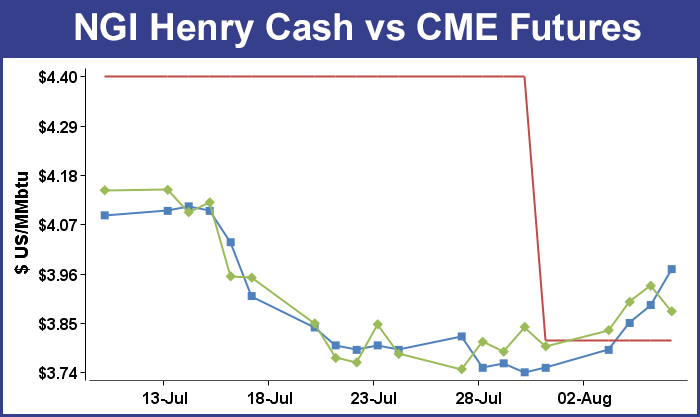 TheNGI National Weekly Spot Gas Average rose by 10 cents to $3.69, and all regions except the Rockies and California were up by double digits.

Of the actively traded points the week’s greatest gainer was found in the Northeast with Transco Leidy gaining 66 cents to $2.12. SoCal Citygate quotes were the week’s losers dropping 4 cents to $4.43.

Going into Thursday’s Energy Information Administration (EIA) storage report there was market grist for both the bulls and bears. Estimates were swirling around the 84 Bcf level, and if compared to last year’s 90 Bcf injection could be interpreted as bullish. Yet the five-year average stands at 49 Bcf, and that would warrant a bearish conclusion. One thing to remember, though, is that last year’s 90 Bcf build included a 14 Bcf reclassification of base gas to working gas. With that in mind an 80-ish build could be seen as bearish on both counts.

IAF Advisors calculated a 79 Bcf increase, and United ICAP was expecting a build of 85 Bcf. A Reuters poll of 25 traders and analysts revealed an average 84 Bcf with a range of 79-90 Bcf.

Bentek Energy calculated a slim 80 Bcf injection based on a high cooling degree day (CDD) count in Texas and the Southeast with a partial offset in the East. “Power burn demand came in at the highest weekly average of the year at 27.9 Bcf/d, pushed higher by a 1.5 Bcf/d uptick in power demand within the Producing Region from the previous week. Total population-weighted cooling degree days within both the Southeast and Texas increased week-over-week by 11 and 21 degree days, respectively,” the firm said in a report.

The actual figure of 82 Bcf left some yawning. “The number didn’t affect any of the ranges at all. The market just rattled around,” said a New York floor trader. “Traders are looking for a reason to push the market higher, but is there any reason to do so? I don’t think so,” he said.

Tim Evans of Citi Futures Perspective saw the 82 Bcf figure “helping to sustain what has been improving market sentiment. We note it is still well above the 50 Bcf five-year average, and so still bearish on a seasonally adjusted basis. That said, it does also indicate some modest tightening of the supply/demand balance relative to the weather for the period, which could also translate into lower injections in the weeks ahead. We still anticipate above average builds, but by a smaller margin.”

Inventories now stand at 2,927 Bcf and are 538 Bcf less than last year and 608 Bcf below the 5-year average. In the East Region 62 Bcf were injected and the West Region saw inventories up by 6 Bcf. Inventories in the Producing Region rose by 14 Bcf.

When trading opened up Friday morning Alan Lammey of WeatherBELL Analytics said, “Today is an important ‘price pivot’ day as a ‘close above’ $3.95 would set the stage for a further advance in prices up to the $4.05 area or higher, but a close below $3.88 today (the weekly Friday close) indicates an increased chance this week’s short retracement rally may be losing steam.”

Analysts see futures eventually making a modest advance over $4. “Although [Thursday’s] miss from average street [storage] expectations was bullish as we expected, it amounted to only 2 Bcf and as a result failed to push values to a $4 handle,” said Jim Ritterbusch of Ritterbusch and Associates in closing comments Thursday to clients.

“While subsequent price action looked bearish, we still see nearby futures ratcheting upward toward the $4.08 area by next week with any assistance from updates to the short-term temperature views. But for now, forecasts still favor patterns slightly cooler than normal across a broad swath of the U.S., a trend that should keep EIA storage injections elevated through the rest of this month.

“The shortfall against five-year averages has now been cut to around 20%. We look for this shortfall to narrow further in gradual fashion by about 1% per week through the injection cycle with this year’s peak supply falling only about 6% below averages. While this expected additional narrowing in the deficit will restrict upside price moves, we don’t see it as capable of sustaining price rallies without major help from a sustained hot spell or a huge hurricane event. All in all, we are maintaining a cautious bullish short-term view in anticipation of a small price lift to about the $4.08 area.”

In Friday’s trading physical gas for weekend and Monday delivery both far and wide gave ground. With the exception of one or two thinly traded points, all locations were in the red.

Producing regions took some hard hits, but uninspired weekend weather patterns left eastern buyers with no compelling reason to load up on three-day packages. Gulf Coast locations were off about a nickel, but Rockies and some California points were down by double digits. Forecasts of generally mild weekend weather prompted declines in the East and Northeast of a nickel or more. At the close of futures trading, September had advanced 8.6 cents to $3.962 and October was up by 8.5 cents to $3.980.

Dominant high pressure was forecast to envelop the Mid-Atlantic and keep temperatures about in line with seasonal norms. “Plenty of warm sunshine is forecast each day through this weekend around New York City,” said AccuWeather.com meteorologist Alex Sosnowski.

“High pressure from the Great Lakes will settle slowly eastward across the Northeast this weekend, [and] the system will bring slightly cooler-than-average air for the middle of August. This time of the year, in the city, typical highs are around 84 F and nighttime lows are around 69 degrees.”

To the west “[a] system is forecast to spread some rain and thunder across the Ohio Valley and southern part of the mid-Atlantic this weekend. That rain would only move into and overwhelm the dry air around the New York City area if this system travels farther north than expected. Cool air will stick around the Northeast into next week. Warmer weather relative to normal is forecast for the second half of August,” he said on Friday.

In New England, quotes also eased. Deliveries to the Algonquin Citygates fell 13 cents to $2.63, and gas on Iroquois Waddington was seen 12 cents lower at $3.60. Gas on Tennessee Zone 6 200 L declined 4 cents to $2.69, and weekend and Monday parcels on Millennium added a penny to $2.27.

Marcellus points also weakened. Gas on Transco Leidy was seen at $2.04, down 16 cents, and deliveries to Tennessee Zone 4 Marcellus shed 5 cents to $1.97.

“Demand has been flat week over week at 2.3 Bcf/d but has decreased -0.3 Bcf/d from the year-over-year 30-day average of 2.6 Bcf/d. Exports have also seen a substantial drop of -1.0 Bcf/d from an average of 10.3 Bcf/d this month last year to this week’s average of 9.3 Bcf/d. The export drop is being driven by flows to the Midwest. The reversal of REX to flow Marcellus gas into the Midwest has coincided with a drop of Midcontinent deliveries to that system of 0.6 Bcf/d year over year. In addition, the northern portions of the Midwest have been taking more gas from Canada via Great Lakes this summer than last. With greater production in the Midcontinent, stagnant demand and lower exports, Midcontinent imports have dropped 1.6 Bcf/d year over year.”

Weather forecasters seem to be having difficulty with the models but are sticking with cooler trends. In its Friday morning 11 to 15-day forecast, Commodity Weather Group admitted to conflicting model interpretations. “Based on trends seen [Thursday] at midday and holding consistent overnight, we strengthen the Midwest cool push next week. More rain risks toward the South offer some cooler changes from Dallas across to the Tennessee Valley, too,” said Matt Rogers, president of the firm.

“The East Coast is about the same or cooler overall compared to [Thursday’s] outlook. We also make some cooler changes to California for next week as the ridge situation is not as optimized for hotter offshore flow, especially for the South. Despite these cooler shifts, we still see the pattern adjustment in the 11-15 day. Both the American and European ensembles agree to bring above-normal temperatures to the East Coast, but they disagree a bit on the timing and much more so on the Midwest situation. The Euro warms the Midwest (seasonal to above) and the American keeps it cooler (seasonal to below). Based on recent trends, we pulled back cooler for the Central U.S.”