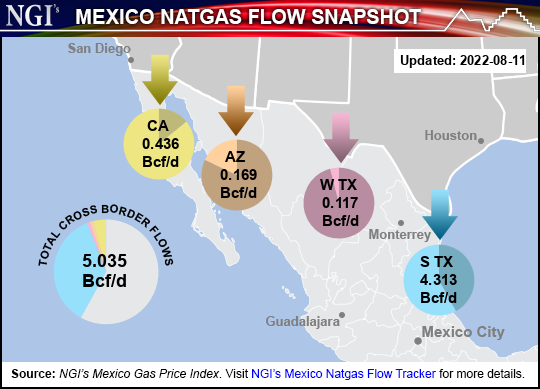 September natural gas prices “are sharply higher for the third day in a row and despite steady cooler trends,” NatGasWeather said on Thursday. “Why prices have been so strong this week is curious to the viewpoint of more comfortable weather patterns arriving for the coming 15 days.  However, bulls are using other factors to justify gains, such as strong power burns on light wind energy generation and slightly weaker production versus last week.”

The New York Mercantile Exchange September contract gained 75 cents over the course of the two previous days, closing at $8.202/MMBtu on Wednesday. This was after news of Freeport LNG’s removal of the force majeure declaration for the incident that knocked the terminal offline earlier this summer.

“With Freeport apparently assigning blame to human error rather than a mechanical fault, it is possible that regaining federal approvals will be an easier process and increase the chances of achieving an October restart,” EBW Analytics Group senior analyst Eli Rubin said.

Mexico imports of natural gas, meanwhile, stayed on the lower end this week. The country imported 5.04 Bcf on Thursday via pipeline, and the 10-day average was 4.88 Bcf/d, according to NGI calculations. West Texas pipelines in particular were showing lower than average figures into Mexico.

Mexico’s Energy Ministry (Sener) chief Rocío Nahle held a meeting with major users of natural gas recently. A source said she argued that it was in the benefit of end users to source their gas from Mexican state companies.

A judge has upheld an injunction halting Sener’s attempted rule change that would require Sistrangas natural gas users in Mexico to source their gas from the Comisión Federal de Electricidad (CFE) or Petróleos Mexicanos (Pemex).

However, “many significant users of natural gas are deciding against taking action against” the rule change, the source said. “They don’t want to lose access to gas, and many are conceding to the conditions.”

Meanwhile, there were Mexico infrastructure announcements galore over the past week.

TC Energy Corp. in conjunction with the CFE is developing an extension of the 2.6 Bc/fd Sur de Texas-Tuxpan pipeline. Sempra Energy said it could be involved in up to three liquefied natural gas export projects on Mexico’s Pacific Coast. And New Fortress Energy Inc. said it was going to build up to four quick-turnaround liquefied gas projects on Mexico’s Gulf Coast.

Mexico’s Sistrangas five-day line pack average slumped this week, hitting 6.419 Bcf on Wednesday (Aug. 10). The line pack is below the optimal range of 6.86-7.29 Bcf needed to guarantee sufficient pressure in the system. Operator Cenagas said there was a force majeure on the Tennessee Gas Pipeline, impacting flows into the Sistrangas injection point.

Demand on the Sistrangas on Wednesday was 4.623 Bcf, up from 4.559 Bcf a day earlier. Mexico gas production fed into the system was 1.274 Bcf, basically flat compared to last Wednesday. Southeast production dominated the total, with 711 MMcf from the region injected into the pipeline system.

In Mexico, NGI natural gas cash prices rose week/week. On Wednesday, Los Ramones fell 7.4 cents day/day to $8.078. Monterrey via the Mier-Monterrey system was down 7.5 cents to $7.837.

On Thursday, the U.S. Energy Information Administration (EIA) reported a 44 Bcf injection into natural gas storage inventories for the week ending August 5. The print was in line with expectations.

The South Central recorded a net 9 Bcf increase in inventories, according to EIA. This included a 10 Bcf build in nonsalt stocks and a 2 Bcf withdrawal from salts. Until Mexico develops storage capability, this is the storage system most readily available to the country.